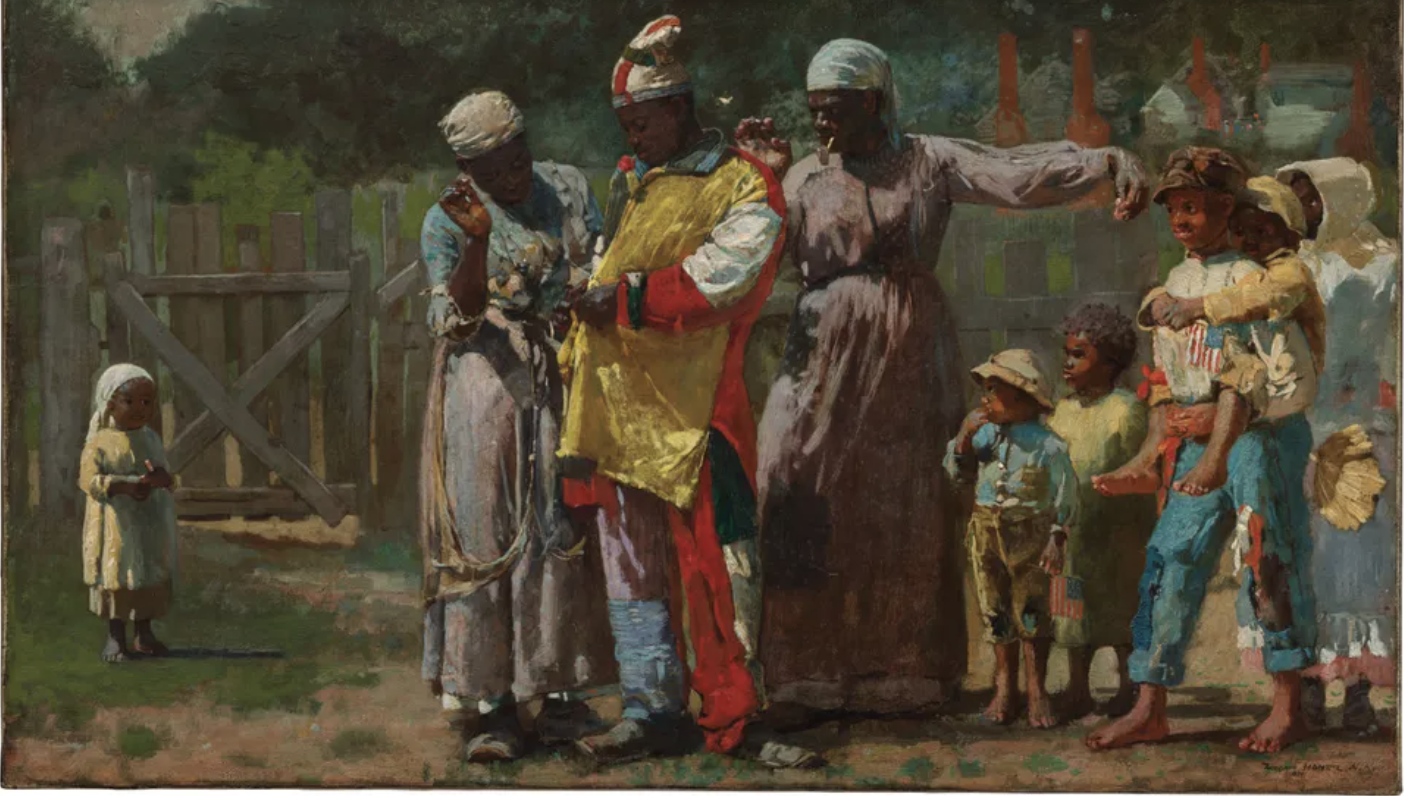 A soldier in blue sits high on the branch of a pine tree. The barrel of his rifle, jutting hard across the canopy of green, is mounted with a lens that he holds close to his eye as he takes aim. We can’t see his face. Neither can the man he is about to kill, down below, hundreds of yards away, whether in the midst of battle or furtively leaving camp to fill canteens—many soldiers got shot this way—or simply lifting his head above fortifications to take a breath. The telescopic rifle, widely introduced in this country during the Civil War, allowed for attack with unprecedented stealth, a technological leap akin in our time to the military drone. In the spring of 1862, Winslow Homer observed the sharpshooting soldiers trained to use these weapons while encamped with the Union Army at the Virginia front. Homer, at twenty-six, was a professional artist-reporter, his drawings often reproduced in the illustrated press. He aspired, however, to be a painter. “Sharpshooter,” by reliable account his first oil painting, completed in 1863, was preceded in the public eye by his engraving of the same hawkeyed soldier in Harper’s Weekly, part of the excitement over the élite new unit’s efficacy and skill. It would be easy to assume that he shared the excitement—his soldier has a mesmerizing energy and focus—were it not for a randomly surviving letter he wrote decades later, recalling that the use of these rifles had struck him “as being as near murder as anything I ever could think of in connection with the army.” He added a quick drawing of an unsuspecting victim framed in a rifle’s crosshairs. 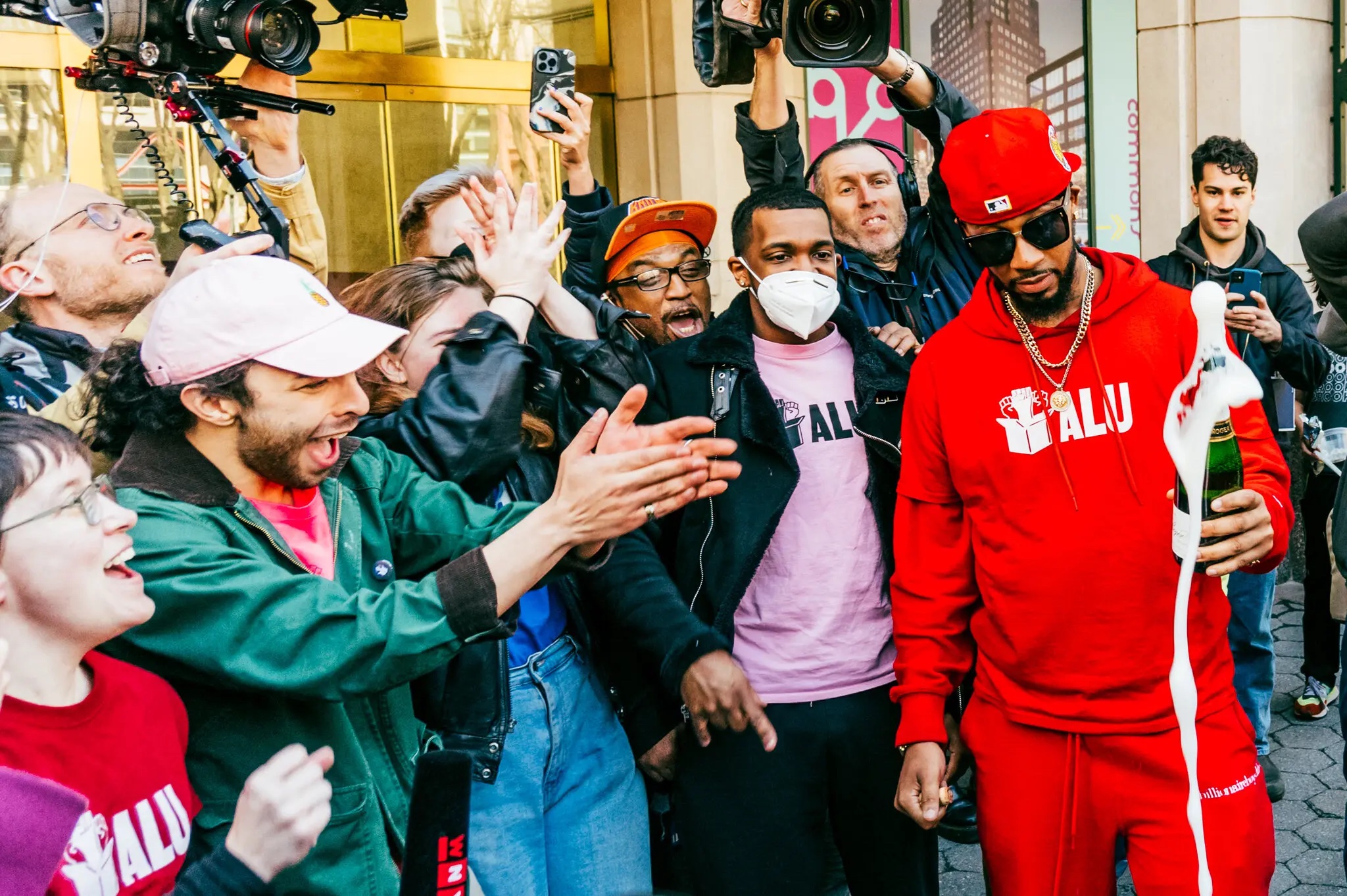 In the first dark days of the pandemic, as an Amazon worker named Christian Smalls planned a small, panicked walkout over safety conditions at the retailer’s only fulfillment center in New York City, the company quietly mobilized.

Amazon formed a reaction team involving 10 departments, including its Global Intelligence Program, a security group staffed by many military veterans. The company named an “incident commander” and relied on a “Protest Response Playbook” and “Labor Activity Playbook” to ward off “business disruptions,” according to newly released court documents.

In the end, there were more executives — including 11 vice presidents — who were alerted about the protest than workers who attended it. Amazon’s chief counsel, describing Mr. Smalls as “not smart, or articulate,” in an email mistakenly sent to more than 1,000 people, recommended making him “the face” of efforts to organize workers. The company fired Mr. Smalls, saying he had violated quarantine rules by attending the walkout.

In dismissing and smearing him, the company relied on the hardball tactics that had driven its dominance of the market. But on Friday, he won the first successful unionization effort at any Amazon warehouse in the United States, one of the most significant labor victories in a generation. The company’s response to his tiny initial protest may haunt it for years to come.


Michelle Duster on the complexities of being Ida B. Wells’s great-granddaughter
Karen Attiah, April 5, 2022, The Washington Post

In 1898, Black journalist and organizer Ida B. Wells-Barnett went to the White House to petition President William McKinley for federal action on the scourge of lynching. More than 120 years later, President Biden last week signed the Emmitt Till Antilynching Act into law, officially making lynching a hate crime in America. Afterward, I spoke with Michelle Duster, a Chicago-based historian and professor — as well as the great-granddaughter of Wells-Barnett — about the long arc of this history. Our conversation has been abridged and edited for clarity. 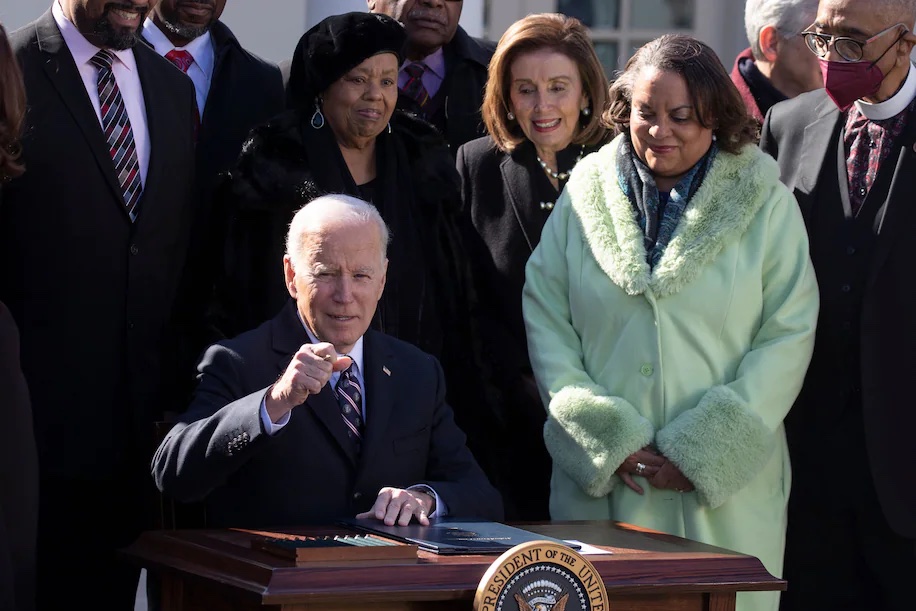 Karen Attiah: Let’s talk about your moment at the White House. I watched your speech saying this was basically 124 years in the making. You have been documenting your great-grandmother’s history through monuments and other works. But now this is actual federal protection for Black people that your great-grandmother was calling for. You seemed so calm and composed! How did you do it? 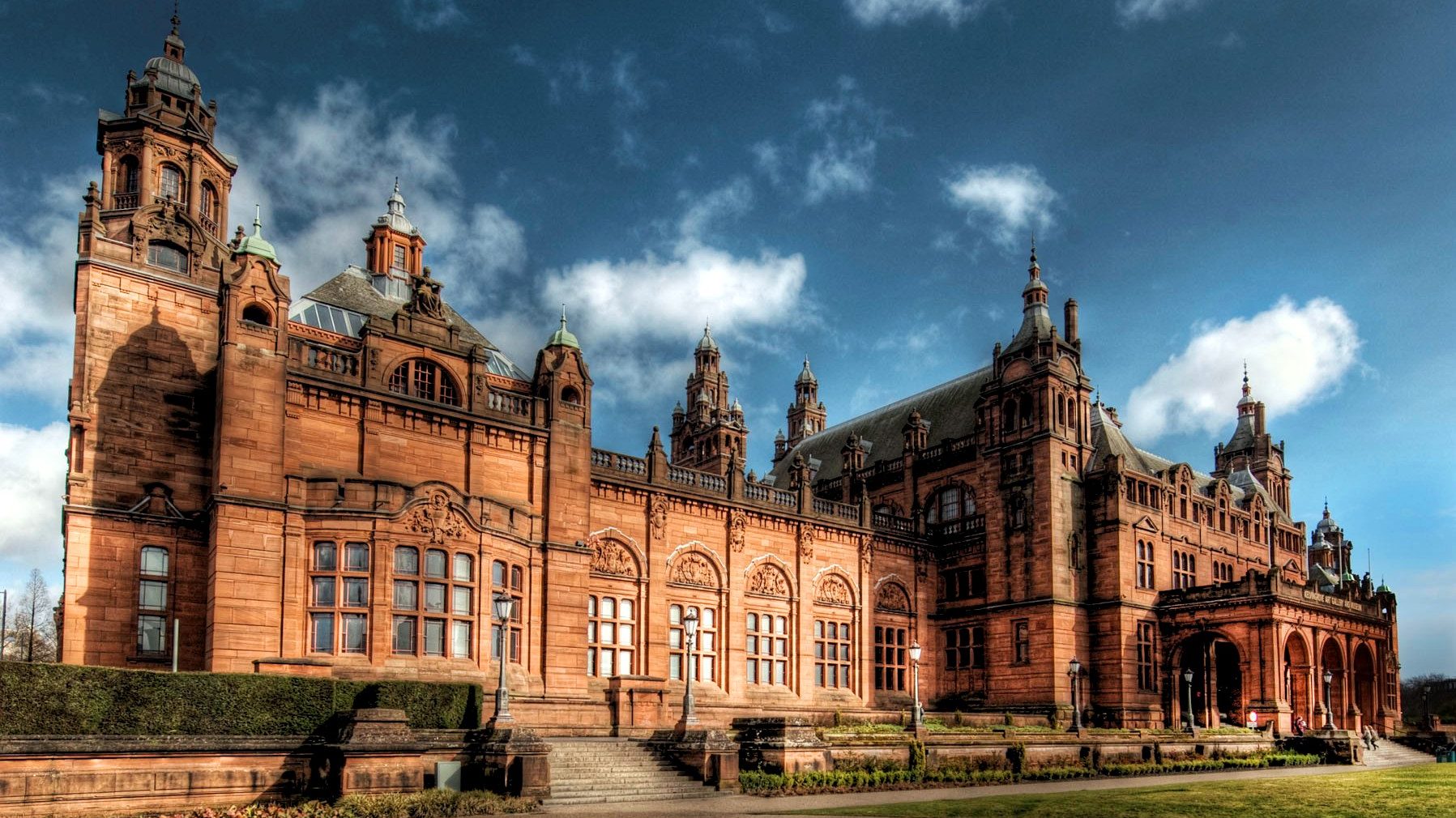 Museums and heritage feature heavily in a report into Glasgow’s links with the transatlantic slave trade.

The study focuses on residents who were involved with Atlantic slavery between 1603 and 1838. The report does not make any recommendations as the city council, which will be holding public discussions and consultations to determine what steps need to be taken next.

The report includes a summary of efforts in the heritage sector, including in museums and galleries, to address historic slavery connections. This points to work at the Museum of London Docklands, Hackney Museum and Archives in London, the International Slavery Museum in Liverpool and Bristol Museums. 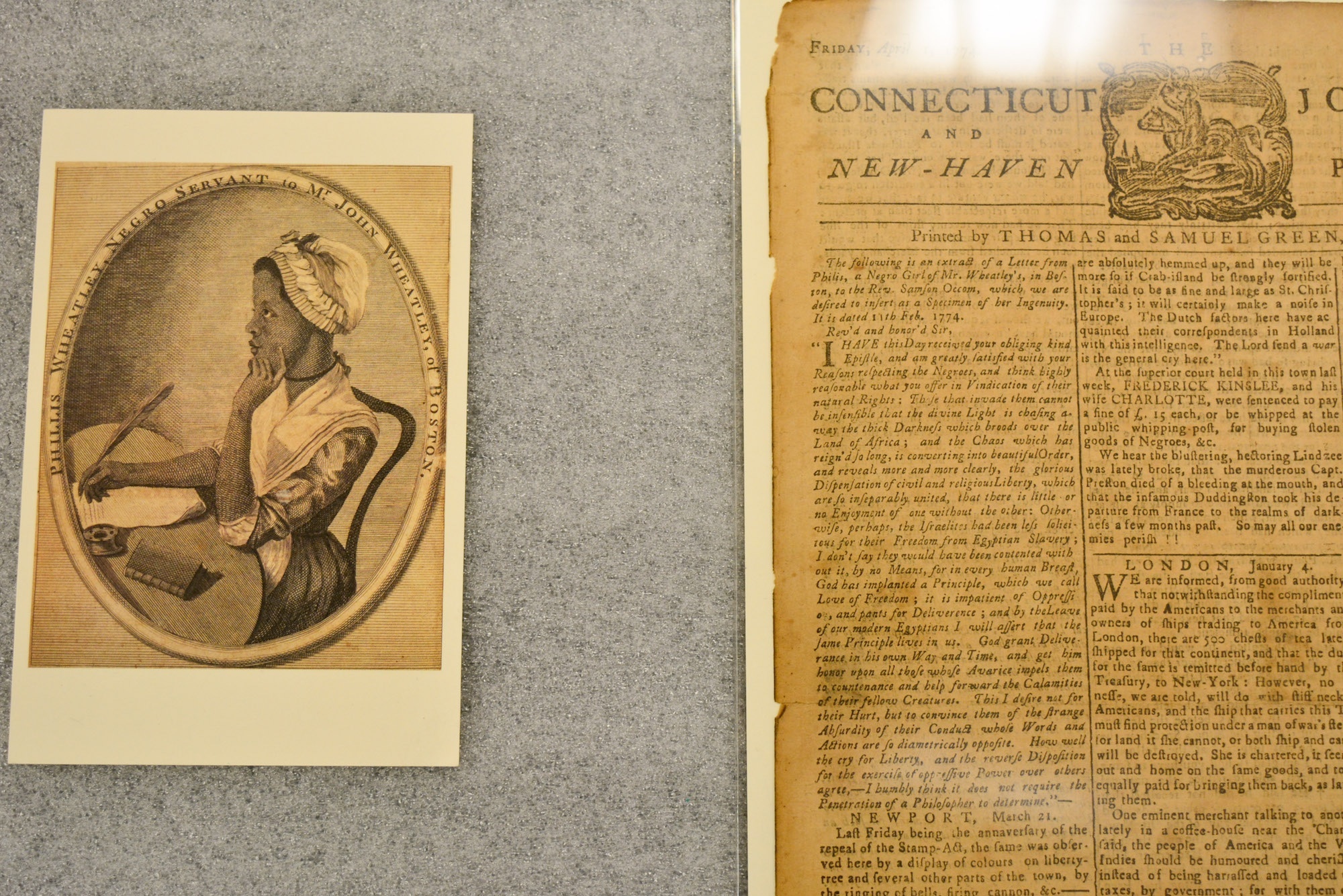 The letter foregrounds the contradiction between the ideals invoked at the country’s founding and the realities of slavery. Working in a storied tradition of resistance writing in the United States, Wheatley invokes the same lofty principles of freedom and equality that justified the revolution to argue for universal rights rather than just for a select few.

Born in West Africa, Wheatley was enslaved as a child and transported to Boston, where she served the family of merchant and tailor John Wheatley. She was taught to read and write by members of the Wheatley family, extraordinarily rare for an enslaved woman at the time. By the time she was 18 years old, she was already seeking to publish a collection of 28 poems in Boston and London, soon becoming the first African American author to publish a book of poetry.