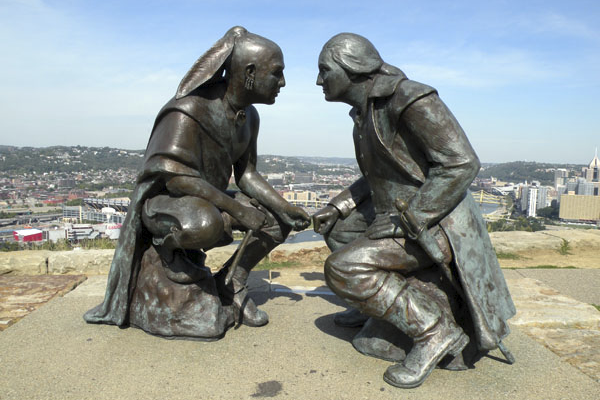 The sculpture "Point of View" imagines a meeting between Guyasuta (Seneca) and George Washington which shaped the future of the Ohio Valley. Pittsburgh.

In 1753, when George Washington first crossed the Appalachian Mountains to the region around modern Pittsburgh, it was to deliver an eviction notice. A French army had occupied what is now western Pennsylvania, and Washington’s British employers wanted them gone.

Accompanying Washington on the last leg of his western trek was a Seneca warrior named Guyasuta. His job was to hunt game for the British, and his and Washington’s paths would cross again.

In the French and Indian War, which started the very next year, the Senecas sided with France. In July 1755, when a nominally French army consisting mostly of Native Americans decimated Gen. George Braddock’s expeditionary force eight miles east of the future site of Pittsburg, two of the survivors, on opposite sides, were Guyasuta and Washington.

Guyasuta also joined in Pontiac’s Uprising (1763-1764), a Native American revolt against the British. But he played an even larger role in negotiating a settlement that was favorable to the natives. In a May 1765 conference, he observed that the British had only treated indigenous Americans fairly when the had to compete with the French for their support. “As soon as you conquered the French,” he reminded a British Indian agent, “you did not care how you treated us, as you then did not think us worth your notice.”

The removal of the French threat enabled the British to crack down on their own American colonists as well, and in the ensuing Revolutionary War, the Senecas fought on their side. Indeed, in 1782, when Parliament decided to make peace with the former colonists and asked the Senecas to do the same, Guyasuta held out, leading a mixed band of native warriors and white Loyalists in the last major incursion into Pennsylvania—at Hanna’s Town on July 13, 1782.