I begin today with a quote which seems to be very befitting in today's world. It ponders the meaning of the word democracy, the act of it and the disregard of its power to hold societies of very diverse peoples together, to act as one unit of thinkers, seeking equal rights and justice for all."

"One of the major obstacles in the way of human progress, of human understanding, is cynicism. The cynicism that states that people only act in their own self-interest or what they believe to be their self-interest, that says within every seemingly altruistic act there lurks a dark core of greed or hatred or fear. To make people behave, the cynics say, to make society work, you have to know how to exploit and manipulate that dark core. That's life, the cynics say, that's just the way people are. And you can listen to this for a while and maybe agree up to a point, but then you say, 'What about the guys in the Lincoln Brigade?' ...the cynics will go to work and talk about raw youth and misplaced idealism and what this faction did to that faction. But they won't go away. ... Those who shipped out for Spain to fight for other people's freedom; they stand up and make you ask 'How did this happen?' They won't go away. ... They went because of a belief in what people could be, in how people could live together, and they put their lives on the line for that belief and a lot of them died." (John Sayles, THE LINCOLN BRIGADE A Picture History, William Loren Katz & Marc Crawford, Atheneum, NY, 1989, Foreword) 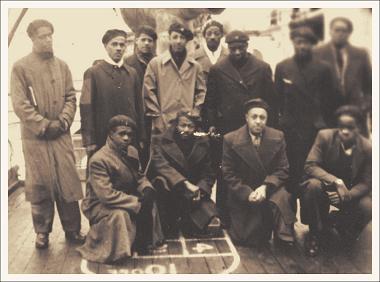 The following text is to introduce you to the Lincoln Brigade. Many of us have never even thought about that war, in another country, for a cause which was not yet owned by our country, in Spain, July 1936 through April 1939. Yet and still, "in 1936, a group of ninety-six Americans sailed from New York to Spain to help defend its democratic government against fascism, then menacing all of Europe. Ultimately twenty-eight hundred United States volunteers reached Spain to become the Abraham Lincoln Brigade." (THE LINCOLN BRIGADE, Katz & Crawford, Atheneum, New York, 1989, Cover fold)

A little more about the Lincoln Brigade: Most of them did not have military training. Their weapons, antiquated rifles, were certainly not equal to those they would be facing. Yet, they marched into battle with, as Katz noted, "rousing songs and homemade banners ... to make Madrid the tomb of world fascism." They had been activists in America during the Great Depression, working and demonstrating for the jobless and homeless. They were from all walks of life. There were laborers, students and professors, literary writers, painters, lawyers, as well as seamen. They were Protestants, Jews, Catholics, etc., "blacks, whites, Native Americans, even sons of famous politicians. "It was the first fully integrated United States army, and Oliver Law, a black Texan, became an early Lincoln commander."

"When Lincoln Commander Marty Hourihan was promoted to the Fifteenth Brigade staff, Steve Nelson, (after being jailed in America, in 1930, for demanding unemployment insurance for all,) was on the committee that selected Oliver Law as the new commander. A man who had served six years in the segregated U. S. Army's Twenty-fourth Infantry and could not rise above the rank of sergeant because he was black now led the Americans in Spain. [...] Because he had the most experience and was best suited for the job,' said Nelson, he was made commander. Not until the Korean War did the U. S. Army break this racial barrier." (32-33)

There were many events surrounding the brave efforts of the Lincoln Brigade, some were optimistic and others appeared forlorn from the depths of cynicism. We all know that the Nazis moved forward and ultimately WWII erupted. Back home, in America, survivors of the Lincoln Brigade, proud as they were for their heroism against fascism, were targeted in the heat of the McCarthy era. They suffered under incursions, including job lost, and were degraded by leading politicians for having fought Hitler and Mussolini in Spain before World War II. Still, the Lincoln Brigade veterans continued their work as helpers of the needy and lead peaceful campaigns "for justice and equality" in America and South Africa; against nuclear arms, and many other causes. "President Reagan, to justify aid to the antigovernment contras in Nicaragua, three times cited the Lincoln Brigade. Many veterans vigorously disputed his comparison. ... The Philadelphia's Sunday Enquirer published a cover story about the veterans, entitled 'They fought Fascism When America Would Not.' In Chicago, Mayor Harold Washington issued a proclamation to honor the Lincolns and Oliver Law. In the 1930s, Law had been beaten by Chicago police for aiding the unemployed." (LB, 68-70)

During their Fiftieth Anniversary Tour of Spain, "the veterans stood at Valanueva Pardillo, (to) pay homage to Lincoln Commander Oliver Law, who had died there. ... Steve Nelson reminded the assembled women and men: 'This was a historic moment -- a black man was placed in charge of a largely white unit for the first time in U. S. history.' Referring to the estimated 120 blacks who served, he emphasized, 'We were integrated from top to bottom, and we want the world to share in the pride that we all feel'." (LB, 77)

Are we not to respect each other and continue to hold the banner high against racism and for equality? Let us all live in a world of peace and harmony.

Their story ought to be common knowledge, but just try to find a high school student who has heard of the Spanish Civil War.