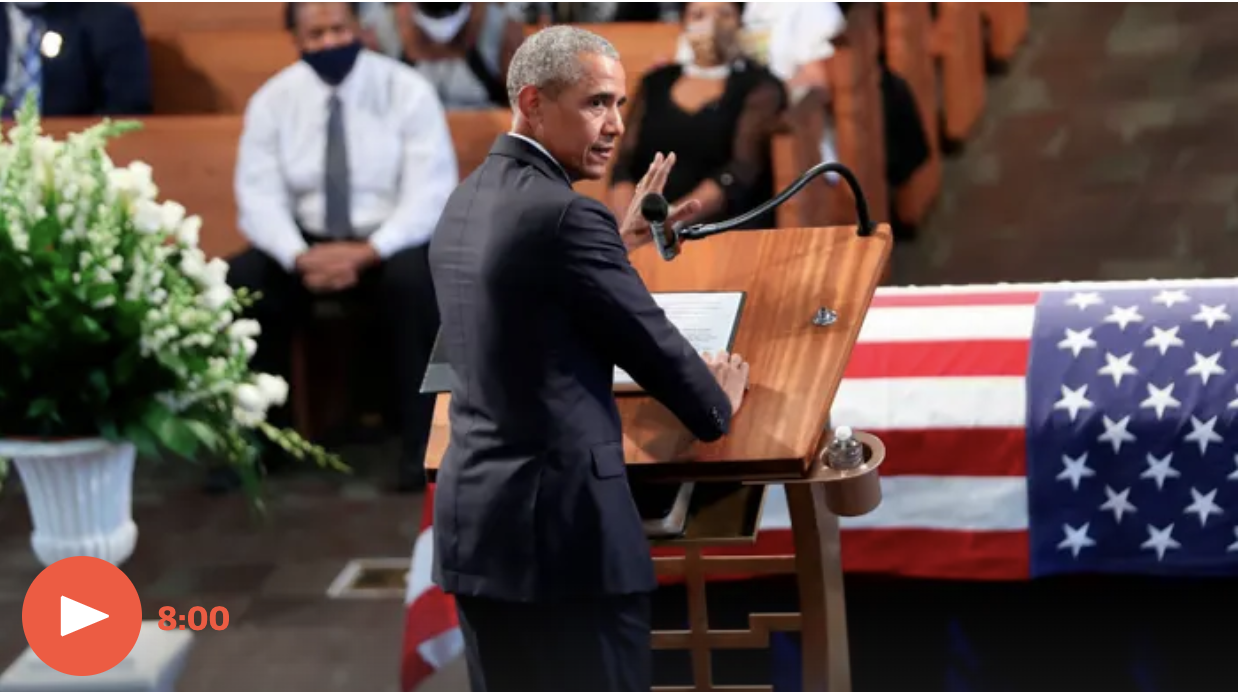 From the pulpit of Ebenezer Baptist church in Atlanta, where Martin Luther King Jr once preached, Obama traced the arch of Lewis’s life – a child born into the Jim Crow south, the youngest speaker at the March on Washington in 1963, a leader of the civil rights marches in Selma, and a US congressman from Georgia – tying his legacy to the present-day civil rights protests ignited by the death of George Floyd, a black man under the knee of a white police officer. He then drew a line from the racist leaders who opposed civil rights in the 1960s to the policies and ideologies embraced by Donald Trump. 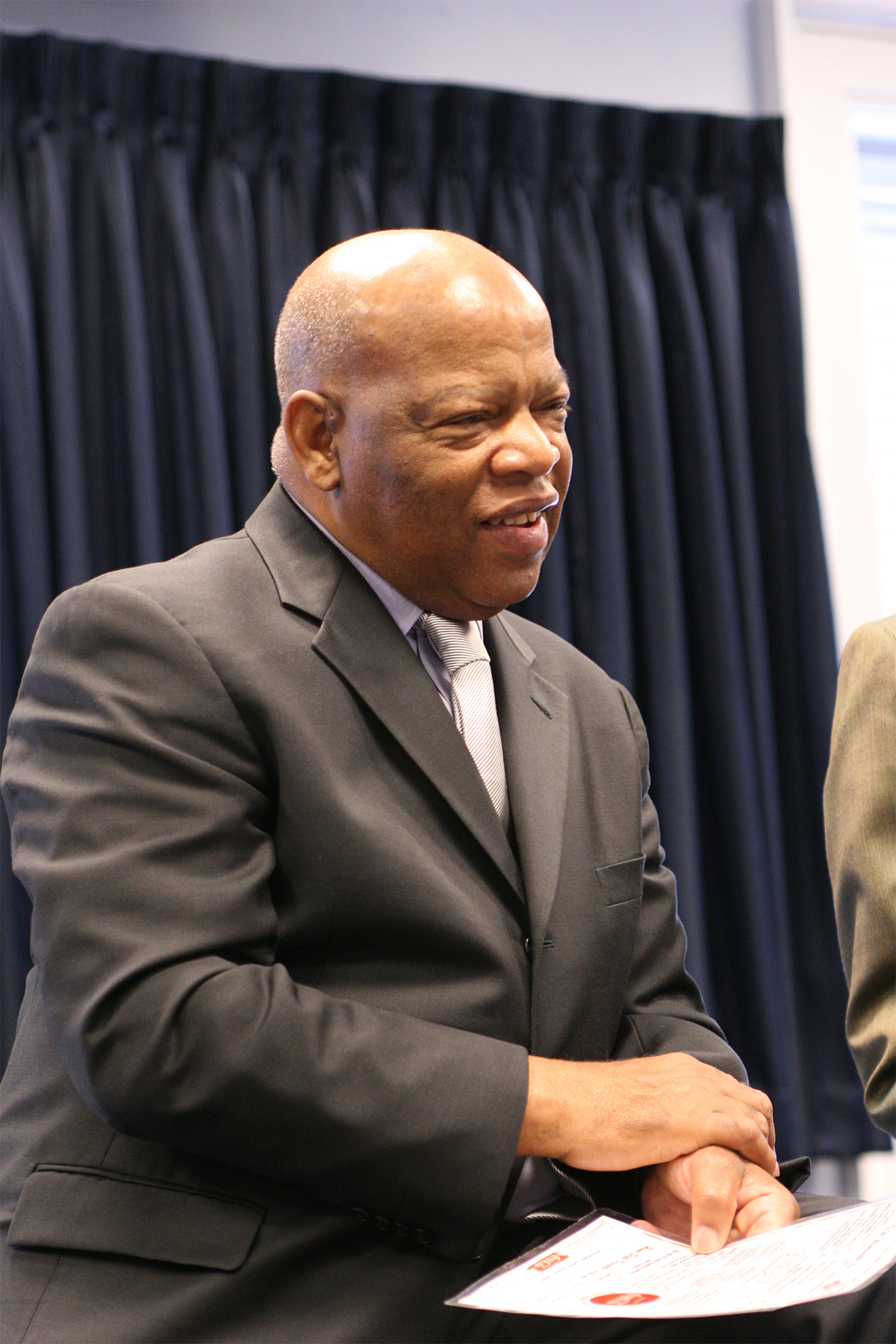 For John Lewis, activism for social change was a communal activity. He believed that people coming together to mentor, protest, and learn could create a society that they wanted to live in, what Dr. Martin Luther King Jr. and others called the “beloved community.”  Creating that community required persistence, optimism, and the willingness to make what he called "good trouble, necessary trouble."

Lewis was born in rural Alabama, and his family, teachers, and the Black church were his earliest mentors and protectors. They nourished his sense of self while he grew up in a nation that systematically denigrated and oppressed African Americans. In a 1979 interview, Lewis recalled listening to the experiences of his “father, and my uncle, and my grandfather, and great grandfathers” about their daily encounters with racial discrimination and white supremacy.  He was a teenager when Emmett Till was murdered in Mississippi, and recalled in his autobiography that he thought, “That could have been me, beaten, tortured, dead, at the bottom of a river.”

The lies our textbooks told my generation of Virginians about slavery
Bennett Minton, July 31, 2020, The Washington Post 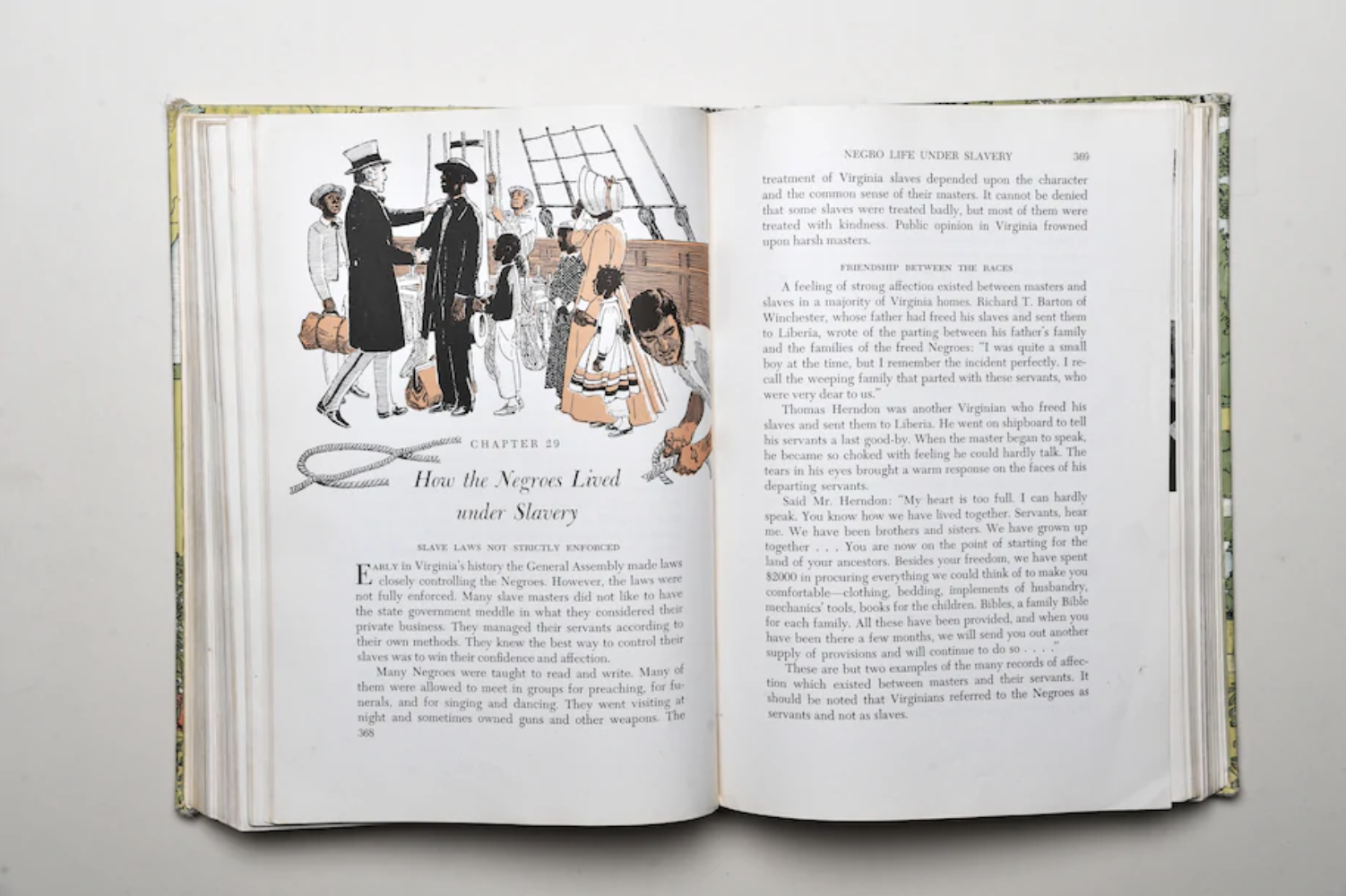 A series of textbooks written for the fourth, seventh and 11th grades taught a generation of Virginians our state’s history. Chapter 29 of the seventh-grade edition, titled “How the Negroes Lived Under Slavery,” included these sentences: “A feeling of strong affection existed between masters and slaves in a majority of Virginia homes.” The masters “knew the best way to control their slaves was to win their confidence and affection.” Enslaved people “went visiting at night and sometimes owned guns and other weapons.” “It cannot be denied that some slaves were treated badly, but most were treated with kindness.” Color illustrations featured masters and slaves all dressed smartly, shaking hands amiably.
This was the education diet that Virginia’s leaders fed me in 1967, when my fourth-grade teacher, Mrs. Stall, issued me the first book in the series deep into the second decade of the civil rights movement. Today, Virginia’s symbols of the Lost Cause are falling. But banishing icons is the easy part. Statues aren’t history; they’re symbols. Removing a symbol requires only a shift in political power. A belief ingrained as “history” is harder to dislodge.

Speech and Slavery in the West Indies
Fara Dabhoiwala, August 20, 2020, The New York Review of Books

Fara Dabhoiwala reviews The Freedom of Speech: Talk and Slavery in the Anglo-Caribbean World, by Miles Ogborn; Tacky’s Revolt: The Story of an Atlantic Slave War, by Vincent Brown; and Island on Fire: The Revolt That Ended Slavery in the British Empire, by Tom Zoellner. 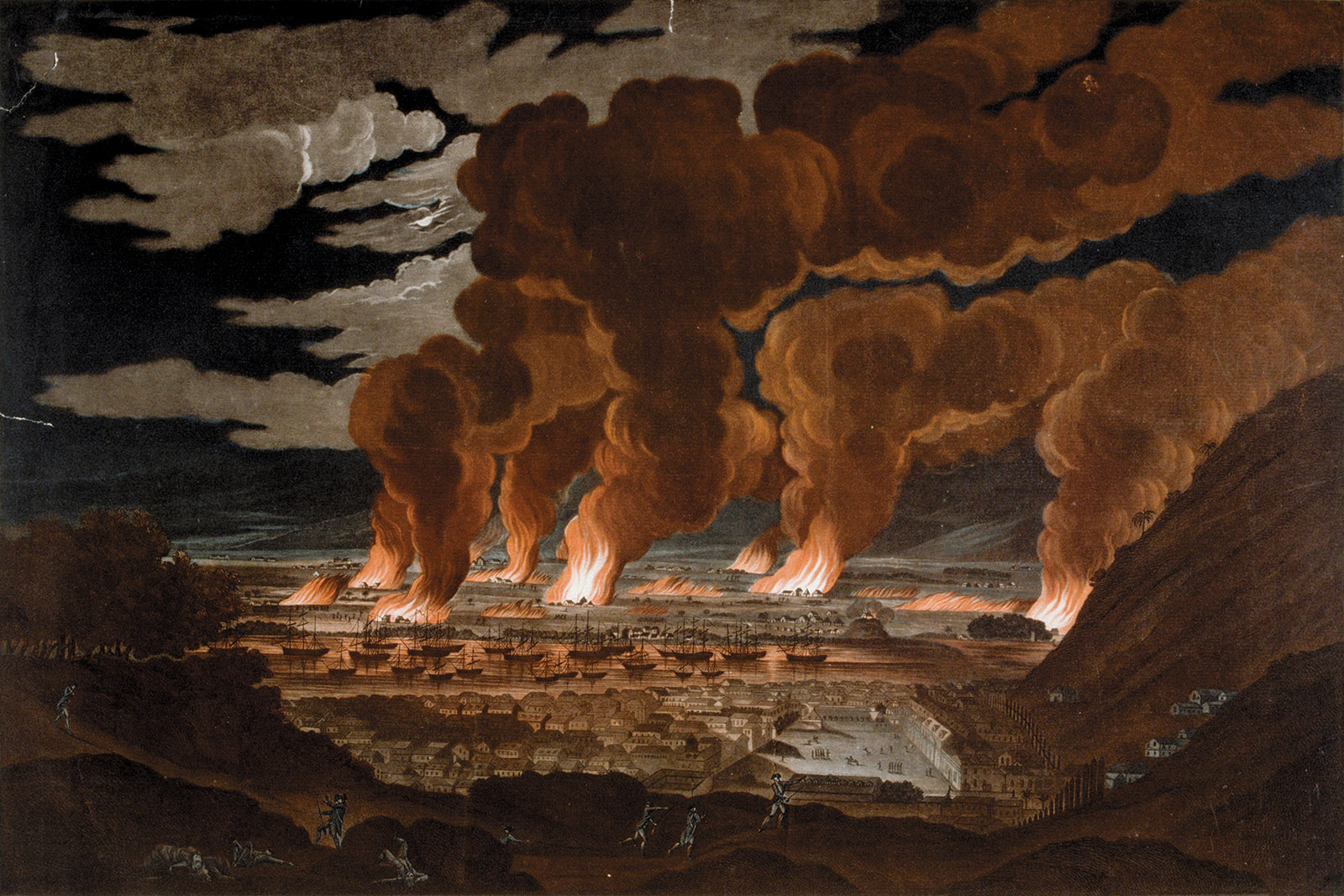 In June thousands of people, provoked by the Black Lives Matter protests sweeping America, took to the streets in the United Kingdom to demonstrate against racism in their own country. One target of their anger was statues honoring British men of the seventeenth, eighteenth, and nineteenth centuries who prospered by enslaving and oppressing others, among them one in Bristol of Edward Colston that was pulled down and thrown into the harbor. It’s hardly surprising that many such monuments exist, for the apathy of the English, Scots, Welsh, and Irish toward their historical complicity in slavery has always been as striking as their indifference to its enduring legacy. Compared to the United States, and despite the work of many outstanding British (and non-British) historians, slavery remains a marginal subject in the public imagination, its reality and consequences mentally separated from the identity and experiences of the nation.

Toppling statues as a decolonial ethic
Russell Rickford, July 2020, Africa Is a Country 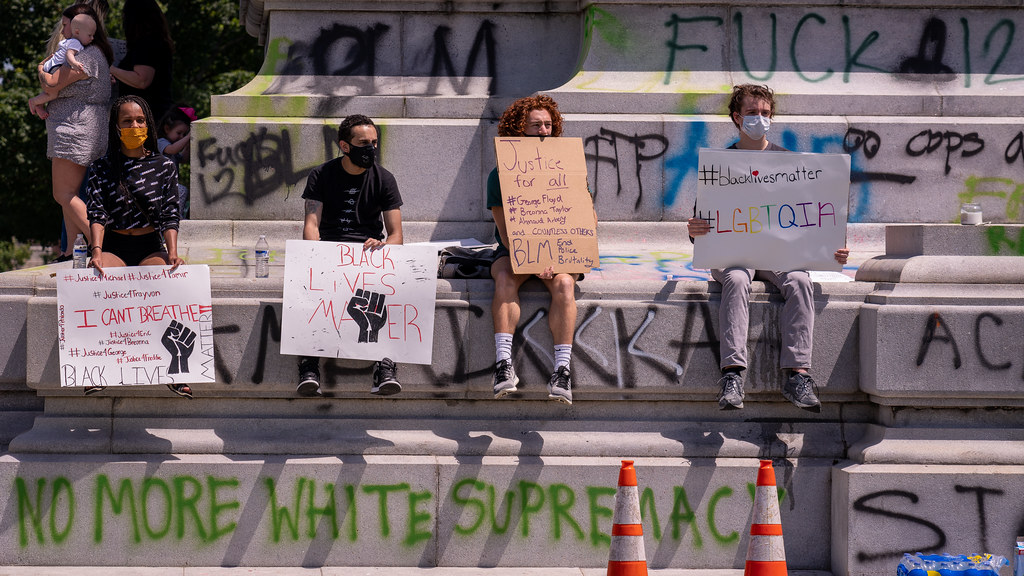 In the eyes of many Americans, history is unassailable. Absolute. It is a sacred artifact—austere, static and detached from the tumult of everyday life.

Historians have a very different relationship to the record of the past. To them history means contestation, not preservation. In the public discourse, “revisionist history” is practically an epithet. But practitioners of history see reshaping and reinterpreting historical accounts as the highest duty of—and perhaps the ultimate rationale for—their craft.

Good history, like a good historian, is never inert. It is dynamic. Restive. Social upheaval is its author, not its adversary. History belongs in the scrum of politics because historical narratives are not merely truth claims; they are assertions of power.

Rotchana Cheunchujit was in bed when it happened. “We’re here to help you,” said someone in Thai.

Then she heard the axe. Federal agents broke down the front door, then stormed in. Soon, she was out on the sidewalk with her roommates, dazed.

“We were in shock,” she says. “We didn’t know what was going on.” Hours later, Cheunchujit would be taken to jail. But in reality, she had just been set free. 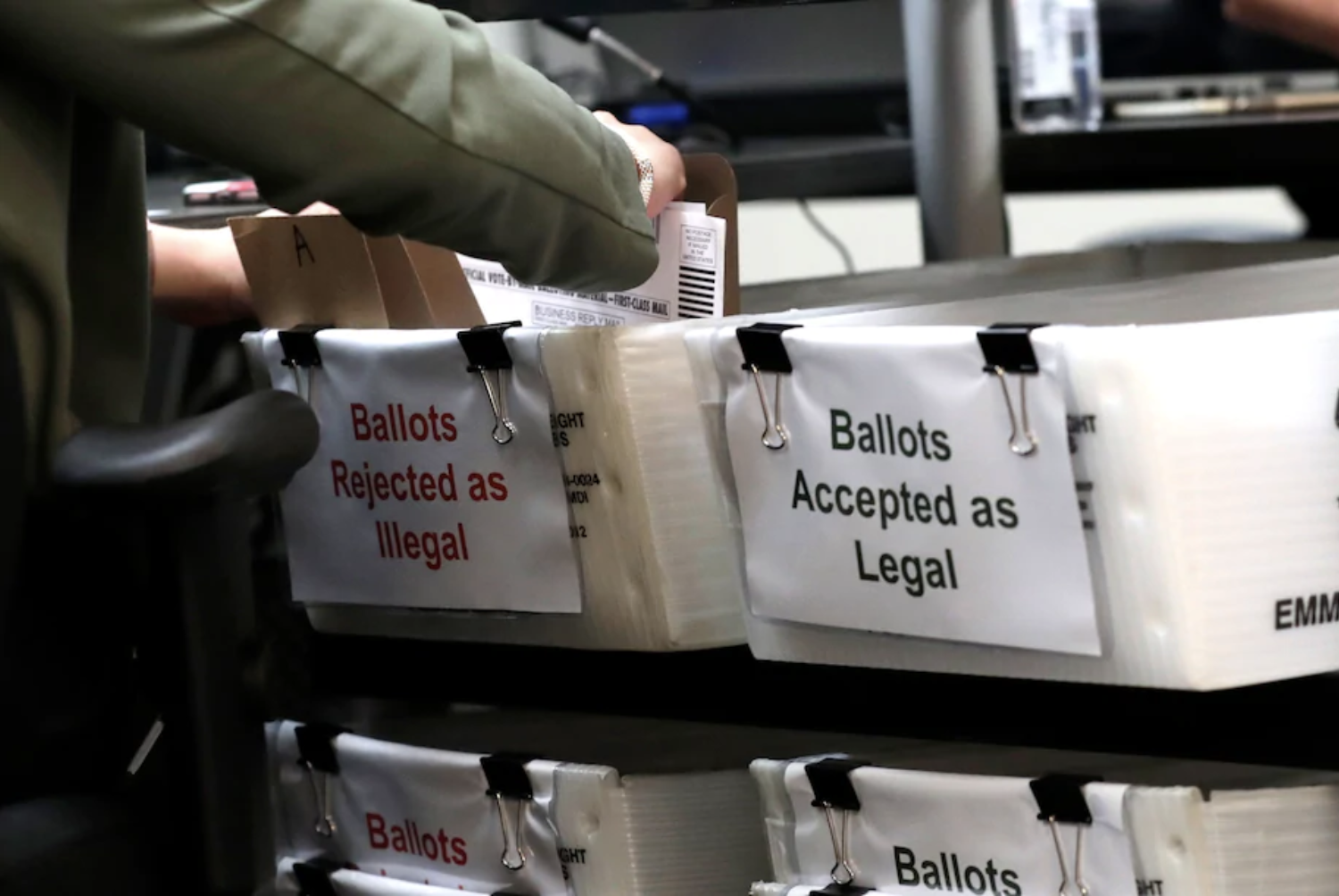 The continuing tragedy of the coronavirus pandemic has offered an unexpected opportunity to change American voting fundamentally through the adoption of vote-by-mail policies. President Trump, however, is sounding the alarm — or, more accurately, the dog whistle.

On Thursday, he tweeted that mail voting was a “catastrophic failure” with no accurate count, warning that 2020 would be “the most INACCURATE & FRAUDULENT Election in history.” He even floated delaying the election, a prospect that was quickly denounced by Republicans and Democrats alike.

Vote-by-mail solutions have long made sense as a way of ensuring people’s voting rights, and they make even more sense now, when they would protect citizens from potentially deadly exposure to covid-19 at the polls. Trump’s opposition to them must be understood as the most recent act in a long, remarkably consistent historical drama defined by the unremitting commitment to impeding non-White voters from exercising their right to political participation. This political tradition dates back to the advent of Black suffrage and the ratification of the Fifteenth Amendment.