Plagues Expose the Foundations of Injustice: double pandemic of poverty and COVID-19 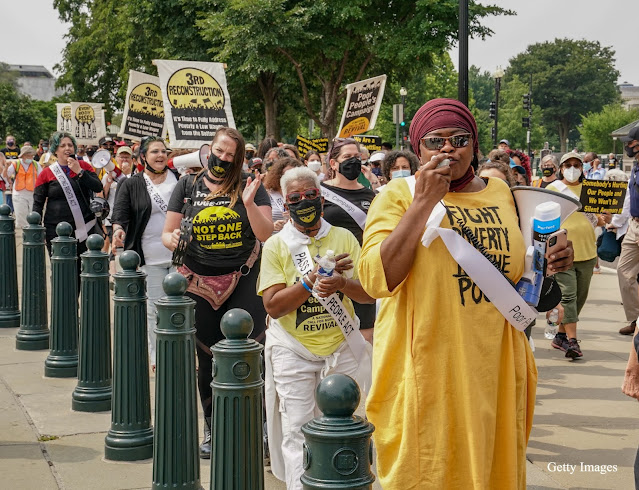 The night before he was brutally shot down on the balcony of the Lorraine Motel in Memphis on April 4, 1968, Rev. Dr. Martin Luther King Jr. preached “Nothing would be more tragic than to stop at this point...either we go up together or we go down together.” Fifty two years later, in the midst of this COVID-19 pandemic and the poverty that preceded it, and is now deepening and spreading because of it, the truth of this statement still reverberates.
Epidemics emerge along the fissures of our society, reflecting not only the biology of the infectious agent, but patterns of marginalization, exclusion and discrimination. We are seeing that our society is only as healthy as our sickest person, our country is only as secure as the least secure homeless family, low-wage worker, indebted student, or uninsured person. Times such as these require that we come together in bold, new ways and build a moral fusion movement that has everybody in, nobody out.


Exactly one year before his assassination, Rev. Dr. King addressed the nation from Riverside Church in New York City about the interlocking injustices of racism, poverty and militarism. The Poor People’s Campaign emerged as a strategy to confront these ills, led by the poor and dispossessed who “have little to lose” coming “to take action together.” Dr. King asserted, “…the whole structure of American life must be changed.”

Today, the structure of American life is indeed changing as we respond to the double pandemic of poverty and COVID-19. There are record numbers joining the ranks of the unemployed; hospitals and morgues are overflowing while the streets are empty; and many of the workers who have been deemed essential and mandated to work are those being paid the lowest wages, with the least worker protections.
We see a health care system on the brink after decades of budget cuts, privatization, and a focus on profits over patients and public health. We see, in stark reality, the truth that 140 million people in America are either already poor or one health care crisis or missed paycheck away from poverty, nearly half of the U.S. population.
In times such as these, we cannot be silent anymore! We must take action together and become a “new and unsettling force in our complacent national life.”
Click here to learn more about who was left out of the stimulus bill, read our article, “The Evil Tucked In to the $2 Trillion Coronavirus Stimulus Bill” in this week’s TIME Magazine, read “Plagues Expose the Foundations of Injustice” in Sojourners, and share this Poverty Amidst Pandemic Litany as we approach the religious celebrations of Easter, Passover and Ramadan this week and in coming weeks.
In the spirit of Rev. Dr. King, take these actions TODAY:
Thank you for taking care of yourselves and each other in these trying times.
Forward together today and always,
Rev. Dr. William Barber II and Rev. Dr. Liz Theoharis
Co-Chairs, The Poor People’s Campaign: A National Call for Moral Revival
Big Isms
LT
Author, Mosaic Artist, Blogger, wildly curious