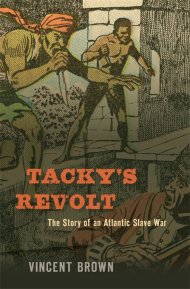 Wager, also known by his African name, Apongo, was a leader of the largest slave rebellion in the 18th century British Empire. But long before taking his part in the great Jamaican insurrection of 1760– 1761, commonly called Tacky’s Revolt, he had been on a remarkable odyssey.
Apongo had been a military leader in West Africa during a period of imperial expansion and intensive warfare there. During this time, he had even been a notable guest of John Cope, a chief agent of Cape Coast Castle, Britain’s principal fort on the Gold Coast. Captured and sold at some point in the 1740s, Apongo became the property of Captain Arthur Forrest of HMS Wager, who renamed him for the Royal Navy warship. Wager came in bondage to Forrest’s plantation in Westmoreland Parish, Jamaica, where he again encountered John Cope, who had retired to his own Jamaican estate. Occasionally, Cope would entertain his acquaintance from the Old World, laying a table for weekend visits, treating the slave as a man of honor, and insinuating that Apongo would one day be redeemed and sent home. Whatever understanding there was between the two men did not outlast John Cope’s death in 1756. In the ensuing years Wager began plotting and organizing a war against the whites, and awaiting an opportune moment to strike.
Taking advantage of Britain’s Seven Years’ War against its European opponents, Wager and more than a thousand other enslaved black people on the island engaged in a series of uprisings, which began on April 7, 1760, and continued until October of the next year. Over those 18 months the rebels managed to kill 60 whites and destroy tens of thousands of pounds’ worth of property. During the suppression of the revolt and the repression that followed, over 500 black men and women were killed in battle, executed or driven to suicide. Another 500 were transported from the island for life. Considering “the extent and secrecy of its plan, the multitude of the conspirators, and the difficulty of opposing its eruptions in such a variety of different places at once,” wrote one planter who lived through the upheaval, this revolt was “more formidable than any hitherto known in the West Indies.”

Vincent Brown is the Charles Warren Professor of American History and Professor of African and African American Studies at Harvard University and the author of The Reaper’s Garden, which won the James A. Rawley Prize, the Louis Gottschalk Prize, and the Merle Curti Award.