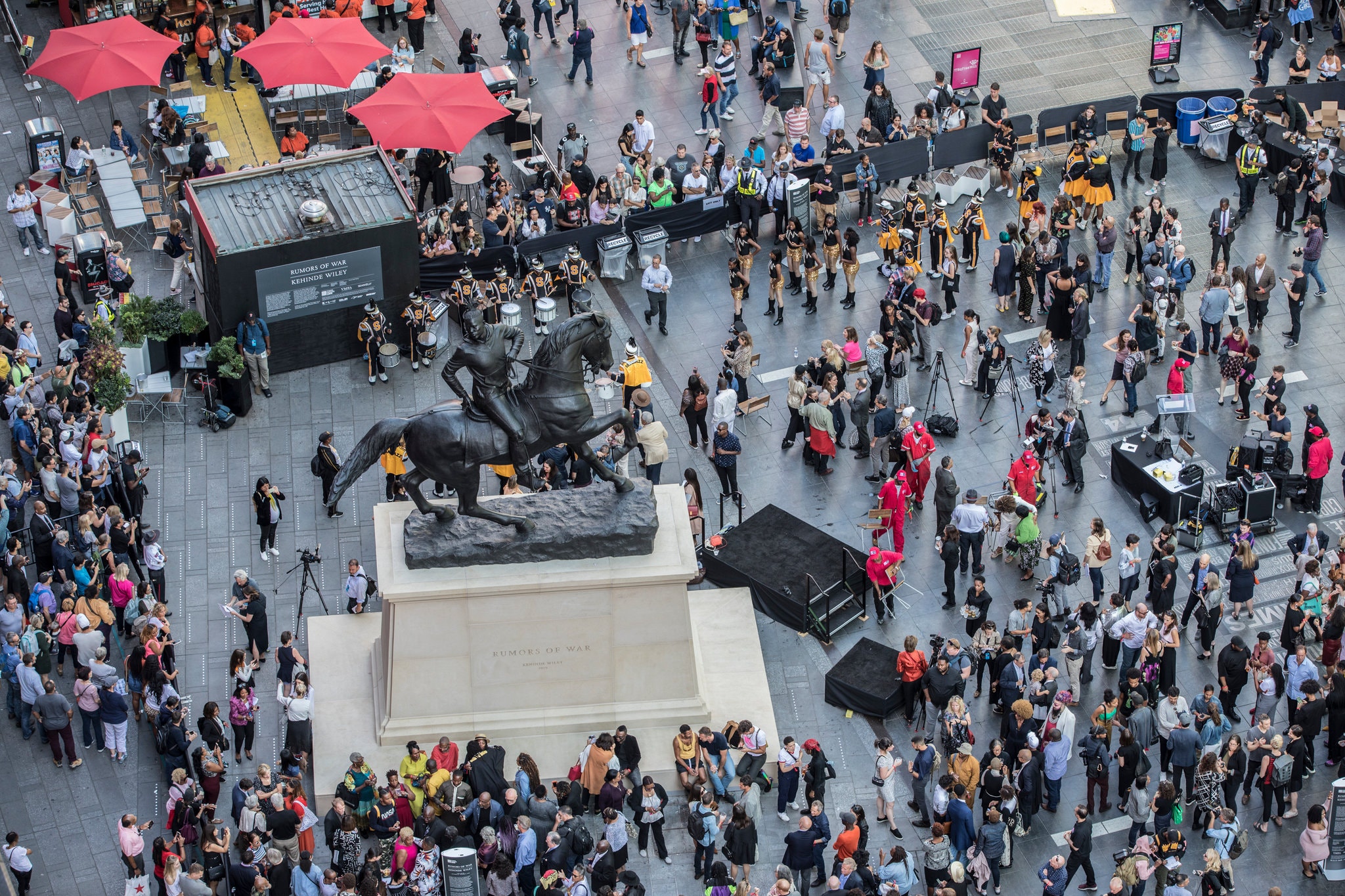 He looks like a man lost in time, uprooted, with the horse he rode in on, from a previous century, perhaps, or was it a future one?

In a riot of flashing neon signs and costumed avengers, populating a patch of Times Square on Broadway between 46th and 47th Streets, he can be seen looking regal and triumphant astride a rearing steed worthy of Napoleon, flanked between the modern colonial outposts of American Eagle Outfitters and Express.

The new statue, a bronze sculpture on limestone titled “Rumors of War” and unveiled on Friday, is the first public work by the artist Kehinde Wiley. Mr. Wiley, 42, is best known for his aristocratic portraits of African-American men, including the one of President Obama that hangs in the National Portrait Gallery.
“Rumors of War,” Mr. Wiley’s largest sculpture to date at a towering 27 feet high and 16 feet wide, was inspired by the heroic, equestrian statues of Confederate generals in Richmond, Va., that line its famous Monument Avenue. After the sculpture leaves Times Square in December, it will be permanently installed in Richmond on Arthur Ashe Boulevard, a major thoroughfare, recently renamed after the Richmond-born African-American tennis icon, that crosses Monument Avenue. 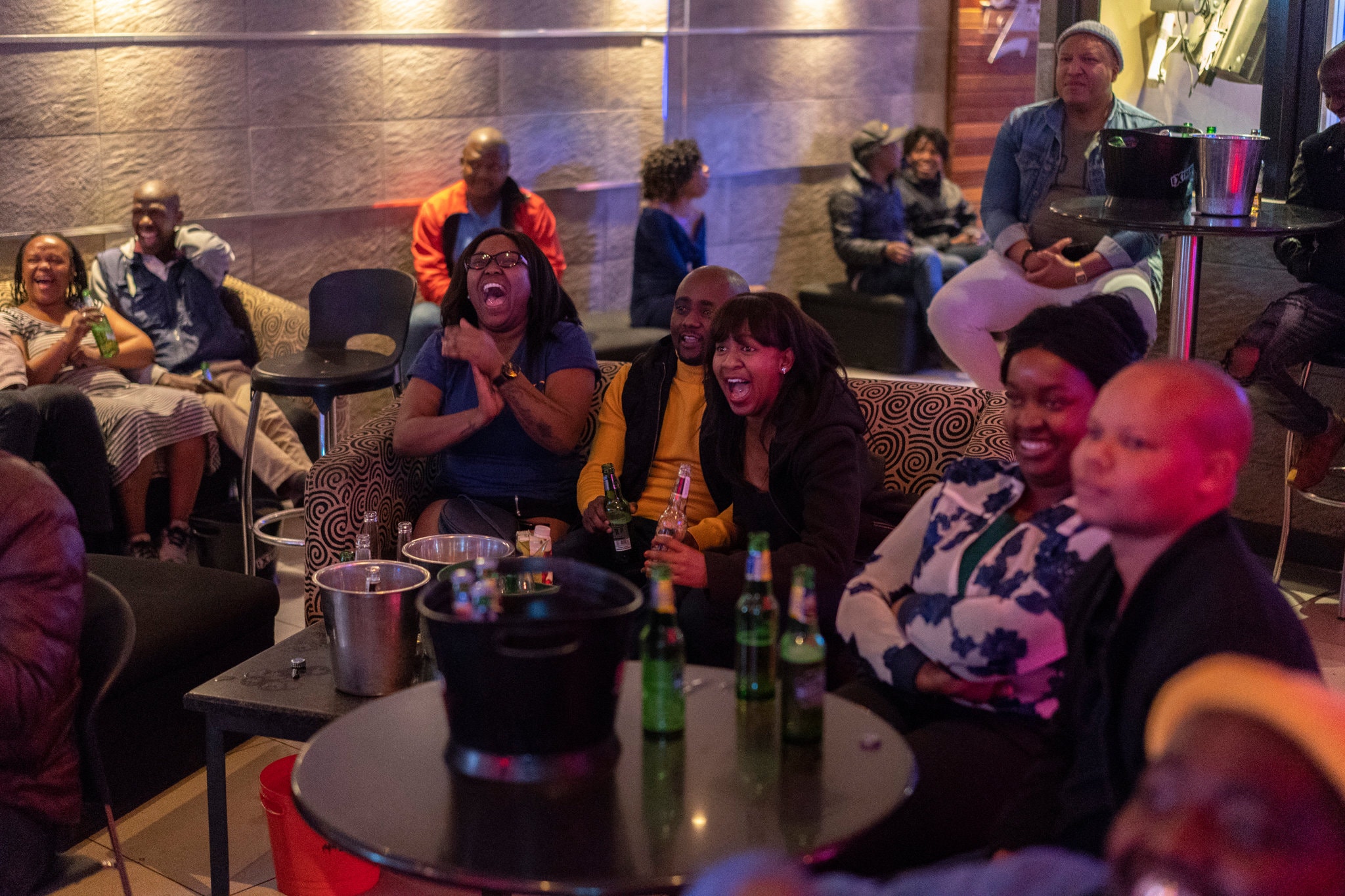 SOWETO, South Africa — Nomsa Victorino had a Lexus in her garage, a pool in her yard, eight bedrooms in her villa and a message for the world about her famous hometown. “Whatever people have in their mind about Soweto — that Soweto is a place for poor people — it’s not like that,” said Ms. Victorino, 50, sitting in one of her three sitting rooms. “It has changed drastically.”

Agnes Sehole had rats on her roof, candles for light, paraffin for heating and a message for the world about her famous hometown. “It’s getting worse,” said Ms. Sehole, 77, sitting in one of two rooms in her house in Soweto. “There’s nothing that I’ve experienced of the new South Africa.”

Soweto, once the country’s largest black township, was a symbol of the united resistance to the racist apartheid regime and home to the anti-apartheid leader Nelson Mandela. It is where the police killed at least 176 protesting schoolchildren during the Soweto Uprising of 1976, and where residents refused to pay the white government for rent, electricity and water during boycotts in the 1980s. To the outside world, Soweto stood for black solidarity.

Today, Soweto embodies the social and class divisions within South Africa’s black majority. It is a place of flashy cars and grand mansions, but also of shanty towns and high unemployment. 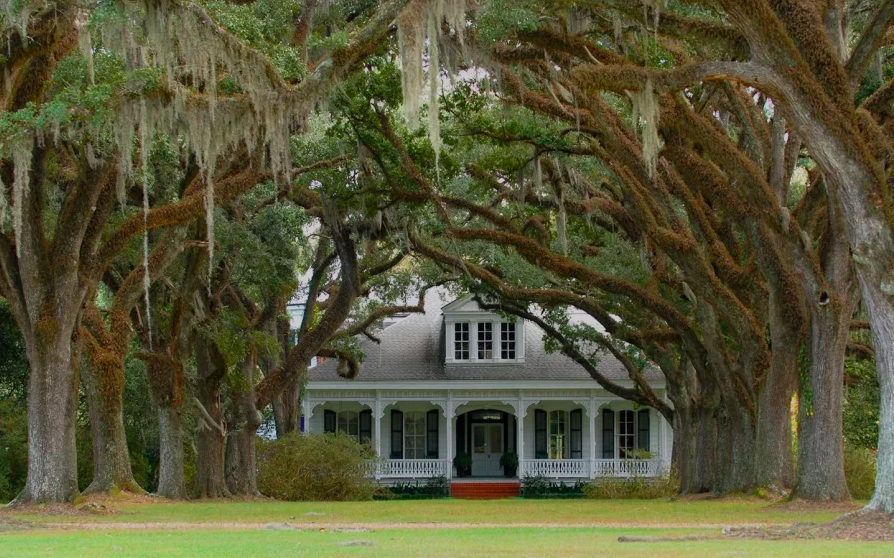 It was not a kind thought that flitted across my mind while I was waiting in the airport in Montreal. The weather was bad, my flight was late, and I was having lunch on the “American side” of the terminal, listening to a big, jovial man talking about his son’s wedding on a plantation in Charleston, South Carolina.

The man was discussing ordinary things—the weather, the bride, the wine served, what music they played. Everyone, he said, was dressed in antebellum clothing.

“Dancing on graves!” is what went through my mind.

Was I being uncharitable? I am the third generation in my family whose body is not legally owned by others—the carnal issue of a legal fiction and a political proof that reigned supreme in the not-so-distant past. My mind drags those details into the present involuntarily, for these feelings are deep in me. At the same time, this is the narrative by which I was protected, insulated, cautioned, and by some measures made paranoid: They might own your body, but they can never own you. 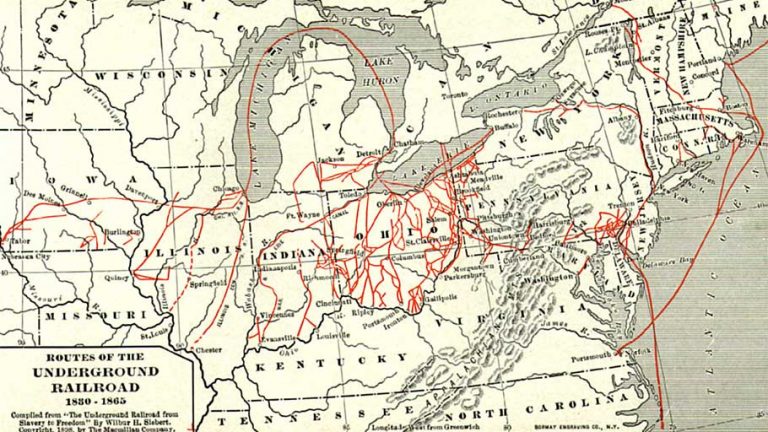 In an interview conducted in 2002, the late Helen Hornbeck Tanner, an influential historian of the Native American experience in the Midwest best known for her magisterial Atlas of Great Lakes Indian History (1987), reflected on the considerable record of “coexistence and cooperation” between African Americans and Indians in the region. According to Tanner, “[an] important example of African and Indian cooperation was the Indian-operated Underground Railroad. Nothing about this activity appears in the historical literature.”
Tanner’s assertion is largely true. Native American assistance to freedom seekers crossing through the Midwest, then often called the Old Northwest, or seeking sanctuary in Indian villages in the region, has largely been erased from Underground Railroad studies. Two key examples from the historiography of the Underground Railroad demonstrate the extent of that deficiency. The first volume, The Underground Railroad from Slavery to Freedom (1898) by pioneering Underground Railroad historian Wilbur H. Siebert, is still a beginning point for many who investigate efforts to assist freedom seekers in the pre-Civil War Midwest. Siebert collected testimony from hundreds of participants and witnesses in the struggle and converted this documentary record into a broad and influential work that is still in print. Exactly two sentences in a work of 358 pages discuss the aid given to freedom seekers by Native Americans, in this case, the hospitality afforded at Chief Kinjeino’s village on the Maumee River in northwestern Ohio.

Fast forward nearly eleven decades to the second work, perhaps the most extensive and authoritative Underground Railroad interpretation since Siebert. Bound for Canaan: The Underground Railroad and the War for the Soul of America (2005) by journalist and popular historian Fergus Bordewich does only slightly better. It includes four sentences out of 439 pages on the assistance given to freedom seekers by Native Americans passing through the region, in this case, the aid provided to Jermain Loguen and John Farney in northern Indiana and Josiah Henson and his family in northwestern Ohio. Readers of these two volumes could be excused for thinking that there was little interaction between freedom seekers and Native Americans in the Midwest.

There are at least two primary reasons for the absence of Native Americans in the historiography of the Underground Railroad. 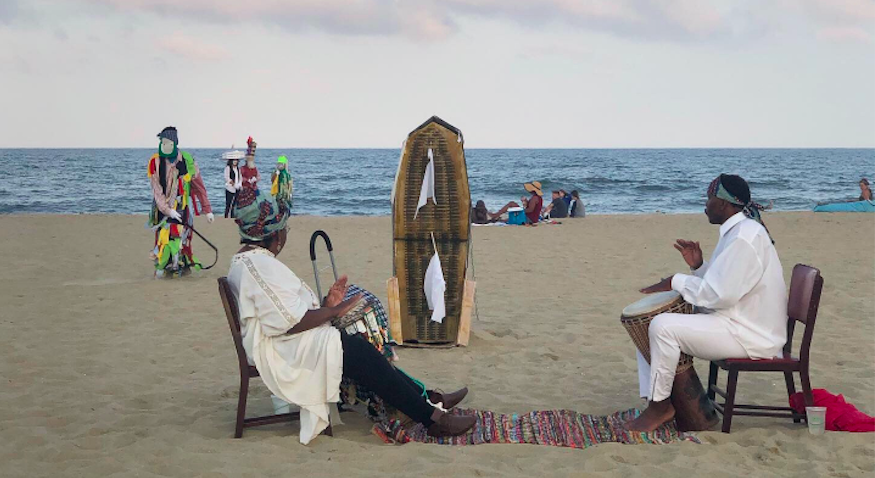 “Junkanooacome” (meaning “Junkanoo is coming” in Jamaican patois) is Lyn-Kee-Chow’s adaptation of Junkanoo, a pan-Caribbean celebration that culminates with a parade of masked dancers. Junkanoo was created by enslaved Africans for an audience of enslaved Africans. It honors John Canoe, a major trader, chief of the Ahanta, and commander of a private army in 18th-century Ghana. Allied with Brandenburg-Prussia, Canoe and his men resisted the Dutch and British for seven years from the redoubt at Fredericksburg.