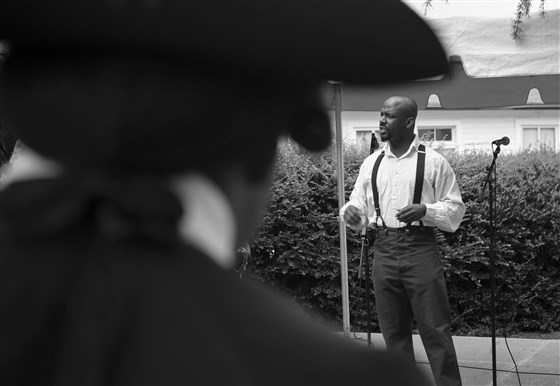 Then, he slipped out of his shined leather shoes, his slim-fit gray vest and the matching trousers he’d worn for the trip to Fort Monroe, on the Virginia coast, for a commemoration marking 400 years since the arrival of the first Africans enslaved in what would become America.

As Rogers stepped into a pair of mahogany cotton trousers, borrowed from the American Civil War Museum’s replica clothing collection, this 21st-century black man — with a cloud-based calendar full of obligations and a habit of walking double-time, chest out, shoulders back — began to recede. Rogers was approaching character now, ready to embody a 19th-century slave.

“I am James Apostle Fields,” Rogers said slowly, almost haltingly, to a woman who inquired about his outfit just outside the men’s room where he’d changed. Then Rogers shifted back to his own voice. “I’ll be portraying Fields,” he told the woman, “my ancestor, an enslaved man who during Reconstruction was elected to the Virginia Legislature.”