Showing posts from October, 2022
Show all

US Fails Children by Not Acting on Child Labor Posted on October 31, 2022 Migrant minor working in agricultural activities in the United States. | Photo: Twitter/ @AwdehRaghid The U.S. Government Accountability Office suggested that 100,000 child farmworkers are injured on the job every year. The probe into the disappearance of a 13-year-old girl found her working at a manufacturing plant in Alabama, a shocking incident that revealed the secret child labor in the United States, the only country unwilling to ratify the United Nations Convention on the Rights of the Child. WAY TOO YOUNG The 13-year-old daughter of Pedro Tzi, an immigrant from Guatemala, was found by the police in Georgia, where the teenager and a 21-year-old Guatemalan migrant were looking for a job. Worse still, Tzi’s daughter and her two underage brothers did not go to school earlier this year, but worked at SMART Alabama in Luverne, an automotive parts manufacturer su
Post a Comment
Read more

The World’s Newest Republic How one nation’s sovereignty movement is setting off a chain reaction among former British colonies in the Caribbean By Hannah Giorgis Getty; The Atlantic October 27, 2022 B arbados, the easternmost stretch of land in the Caribbean Sea, is a pear-shaped island surrounded by a dense network of bright coral. As you crisscross the island, gently sloped hills give way to mazes of sugarcane fields. The plantations that once controlled the sugar crop were some of the first outposts of British colonial control in all of the Americas. That history, dating back to when an English ship arrived in 1625, is not as distant as it may seem. Though Barbados gained its independence as a constitutional monarchy in 1966, only last year did the nation formally sever ties with Britain—removing Queen Elizabeth II as its head of state and electing the nation’s first president in the process. As in any postcolonial place, the complexities of the past occupation are o
Post a Comment
Read more

In The News #BigIsms #CivilWar #BornintoSlavery

The U.S. Thinks ‘It Can’t Happen Here.’ It Already Has. Jamelle Bouie, October 18, 2022, The New York Times The move from democracy to autocracy isn’t a sudden shift. It is not a switch that flips from light to dark with nothing in between. But it’s also not quite right to call the path to authoritarianism a journey. To use a metaphor of travel or distance is to suggest something external, removed, foreign. It is better, in the U.S. context at least, to think of authoritarianism as something like a contradiction nestled within the American democratic tradition. It is part of the whole, a reflection of the fact that American notions of freedom and liberty are deeply informed by both the experience of slaveholding and the drive to seize land and expel its previous inhabitants. As the historian Edmund Morgan once wrote of the Virginians who helped lead the fight for Anglo-American independence, “The presence of men and women who were, in law at least, almost totally s
Post a Comment
Read more

In The News #BigIsms #OneWayTickets

When Segregationists Offered One-Way Tickets to Black Southerners Jacey Fortin, October 14, 2022, The New York Times When two planeloads of asylum seekers were flown to Martha’s Vineyard last month, Peola Denham Jr. recognized an echo of his own experience from six decades ago — one nearly forgotten in the long history of Black Americans’ struggle for civil rights. “What really took me back,” recalled Mr. Denham, 73, “is that when the people got to their destinations, they didn’t get what they were promised.” The migrants on Martha’s Vineyard, who were primarily from Venezuela, found themselves repeating history, pawns in a political fight. The promise — as dozens of them would later recount to lawyers and journalists — was of jobs and resettlement help. Instead, they arrived with no warning to the community, which nevertheless scrambled to find them food and shelter. For Mr. Denham, in the spring of 1962, the promise came in the form of bus and train tickets off
Post a Comment
Read more

In The News #BigIsms #TellTheTruth #1835RagamuffinWar

Limiting academics’ freedom to tell the truth about racism is not new Eddie R. Cole, October 3, 2022, The Washington Post Last summer, the University of Nebraska president and campus chancellors were forced to defend academic freedom following a state resolution to ban teaching critical race theory. A few months later, the Board of Regents for the University System of Georgia issued new guidelines for tenure and post-tenure review policies that sparked a backlash. And similar concerns exist in Oklahoma, Mississippi and other states where recent demands to prohibit teaching about race and the history of racism has widespread public support. In response, faculty senates and professional associations have issued public statement after statement condemning those political efforts, which they argue weaken academic freedom. For example, the faculty senate at Virginia Tech noted, “As scholars and educators, we are called to affirm that limits on discourse and inquiry are a
Post a Comment
Read more

How did Columbus Day become a national holiday? #BigIsms 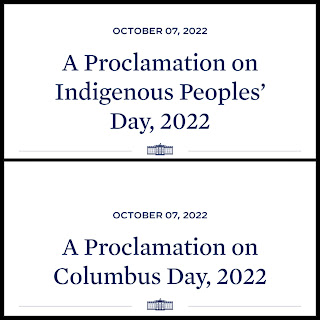 In The News #BigIsms | The Promise of Freedom

The Promise of Freedom Elias Rodriques, October 3, 2022, The Nation On May 24, 1861, the fate of the Civil War was unclear. The Confederacy was formed in large part to defend slavery, but the Union was not yet committed to ending the chattel regime. That did not deter three enslaved people—Frank Baker, James Townsend, and Shepard Mallory—from doing their part to change the meaning of the conflict. Leased out to construct Confederate defenses in Virginia, they fled at night, rowing a boat four miles north along the Chesapeake coast to Fort Monroe, the Union’s only base in Virginia at the time. Under the Fugitive Slave Law, the Union should have returned the three men to their enslavers. The commanding officer of the fort, Benjamin Butler, thought differently: Secession had invalidated any Union responsibility to Confederate property, he insisted, and the men could be kept as “contraband of war.” Butler still justified the emancipation of the enslaved by treating them
Post a Comment
Read more

Bill Gates’ Grandfather pic.twitter.com/Edaq0vBBE9 — David Wolfe (@DavidWolfe) October 3, 2022 No country has created more victim nations than the United States. With its inevitable economic collapse a better world can emerge without forever wars, bullying & theft. The sad reality is instead of stepping aside the US would rather blow the world up. https://t.co/8UFD04PwiS — Kim Dotcom (@KimDotcom) October 2, 2022
Post a Comment
Read more

Portraits of Native Americans in the Civil War Era

Special Exhibition Indigenous Identities: Portraits of Native Americans in the Civil War Era Reading Public Museum, Reading, PA/USA October 1, 2022 – January 8, 2023 https://www.readingpublicmuseum.org/indigenous-identities   The nineteenth century was a period of immense growth and change for the United States. After the end of the Civil War in 1865, westward expansion accelerated as settlers went in search of new land and financial prosperity. Tasked with exploring these new lands was geologist Dr. Ferdinand V. Hayden, who led expeditions to survey the new territories of Nebraska, Wyoming, and Colorado from the 1860s to the 1880s. Hayden’s expeditions were brought under the Department of the Interior and officially called the Geological and Geographic Survey of the Territories in 1870. Accompanying Hayden on his tours of the West was photographer William Henry Jackson, who documented their travels through photographs. The information gathered from this and other surveys
Post a Comment
Read more
More posts