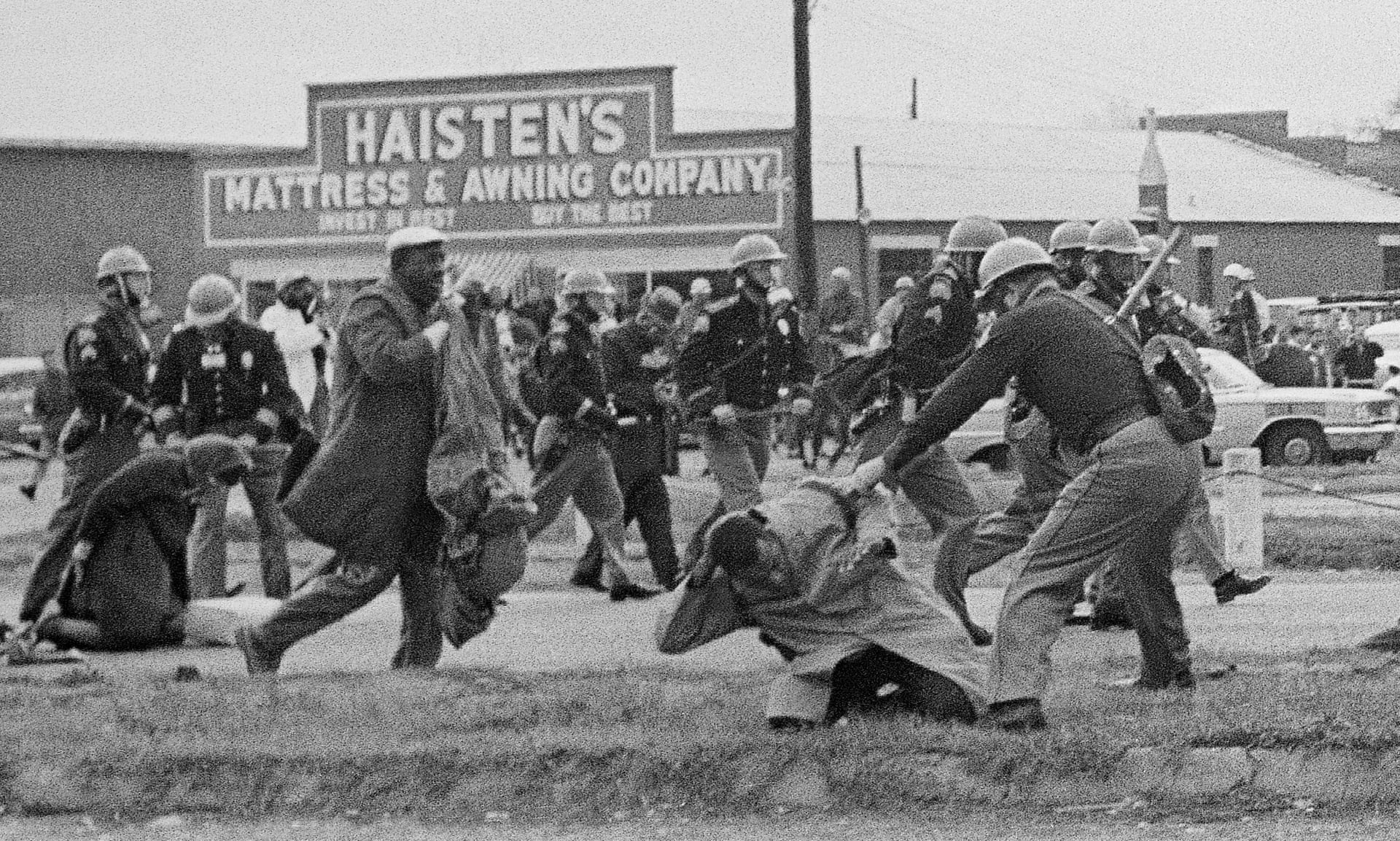 He grew up on a farm in rural Alabama, a short walk from the cotton fields of the Jim Crow south. Lewis, who had ambitions to be a minister, tried out his oratory by preaching to the family chickens. He went to segregated public schools and was denied a library card because of the colour of his skin, but he was an avid reader of books and newspapers and was inspired by the sound of Martin Luther King’s sermons on the radio.

Lewis wrote to King seeking support to become the first black student at his local college, and became a fellow advocate of nonviolent protest, civil disobedience and, as he put it to the end, “good trouble”. But this was never to be mistaken for a lack of radicalism or willingness to put himself on the line: he was arrested 40 times from 1960 to 1966. 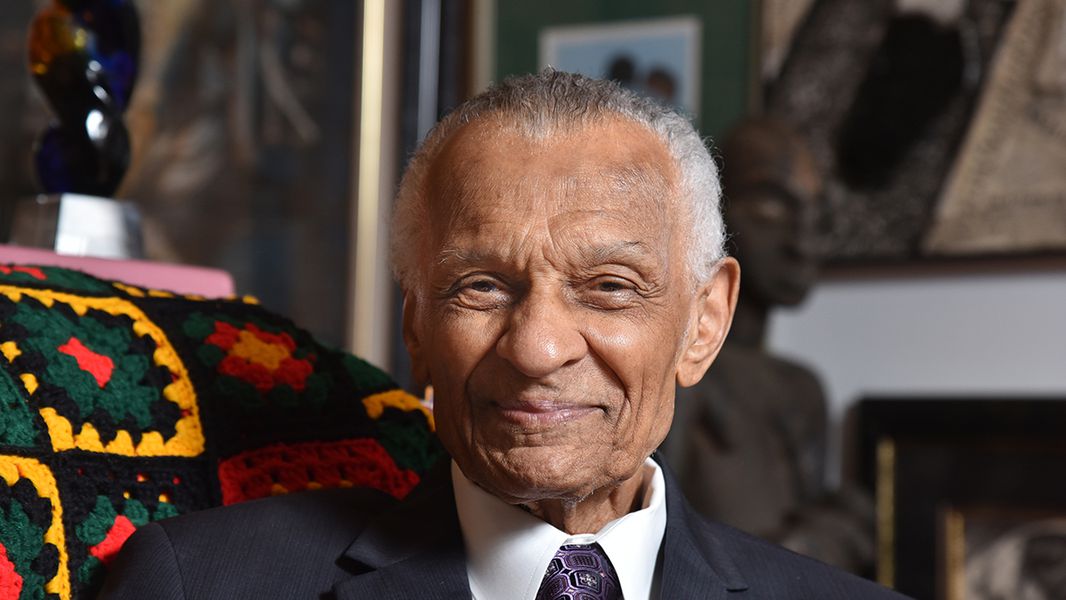 The Rev. C.T. Vivian made his lasting mark on the civil rights movement during an ugly confrontation that tested his commitment to nonviolence.

Vivian and other activists were on the steps of the Dallas County courthouse in Selma, Ala., trying to register Black voters. Standing in a cold rain, Vivian passionately articulated the argument for the right of every person to vote.

Sheriff Jim Clark, a noted segregationist, punched Vivian in the mouth, knocking him to the ground.

Vivian did not retaliate. Instead he picked himself up and continued to argue for the right to vote.

Before being carted off to jail, he had 11 stitches put into his mouth.

“I had to show that I wasn’t afraid,” Vivian said in a 2013 interview with The Atlanta Journal-Constitution. 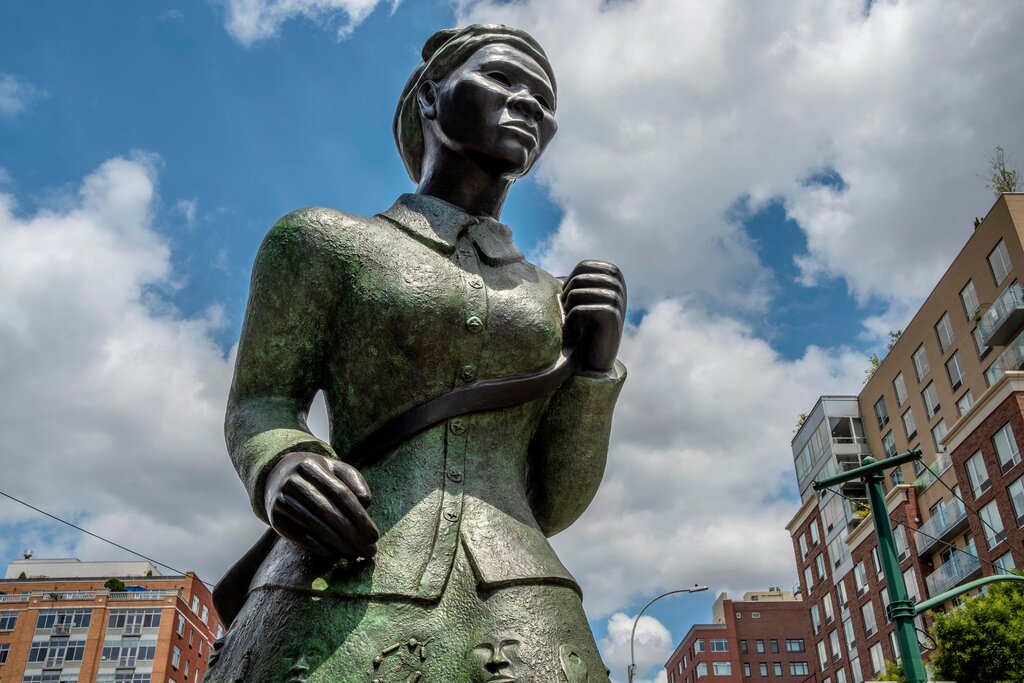 On July 9, former Vice President Joseph Biden announced a new slogan for his campaign: “Build Back Better.” In economic terms the tag line makes sense even if it lacks moral inspiration. It complements the call others have made for a “Building Back Freer” Covid-19 recovery process that both incorporates our current racial reassessment in the United States and responds to an escalating crisis of labor exploitation and modern slavery across the globe.

When Trumpism can finally be ushered into oblivion, there will be much to rebuild. Our new Reconstruction will need local imagination, but also federal leadership on the cultural front.

The Biden campaign has established task forces on health care, immigration, the economy and racial inequality, education, climate and immigration. The campaign should promptly do the same on our roiling national confrontations over monuments, memorialization, and the learning and uses of history.

For every $100 in wealth held by a White family, a Black family has just $10. But studies by Yale’s Jennifer Richeson and Michael Kraus show that Americans believe that the disparity is much smaller. They explain why the misperception is a huge hurdle to closing the gap.

“Do You Think You’re Not Involved?” The Racial Reckoning of Blood at the Root
Casey Cep, July 11, 2020, The New Yorker 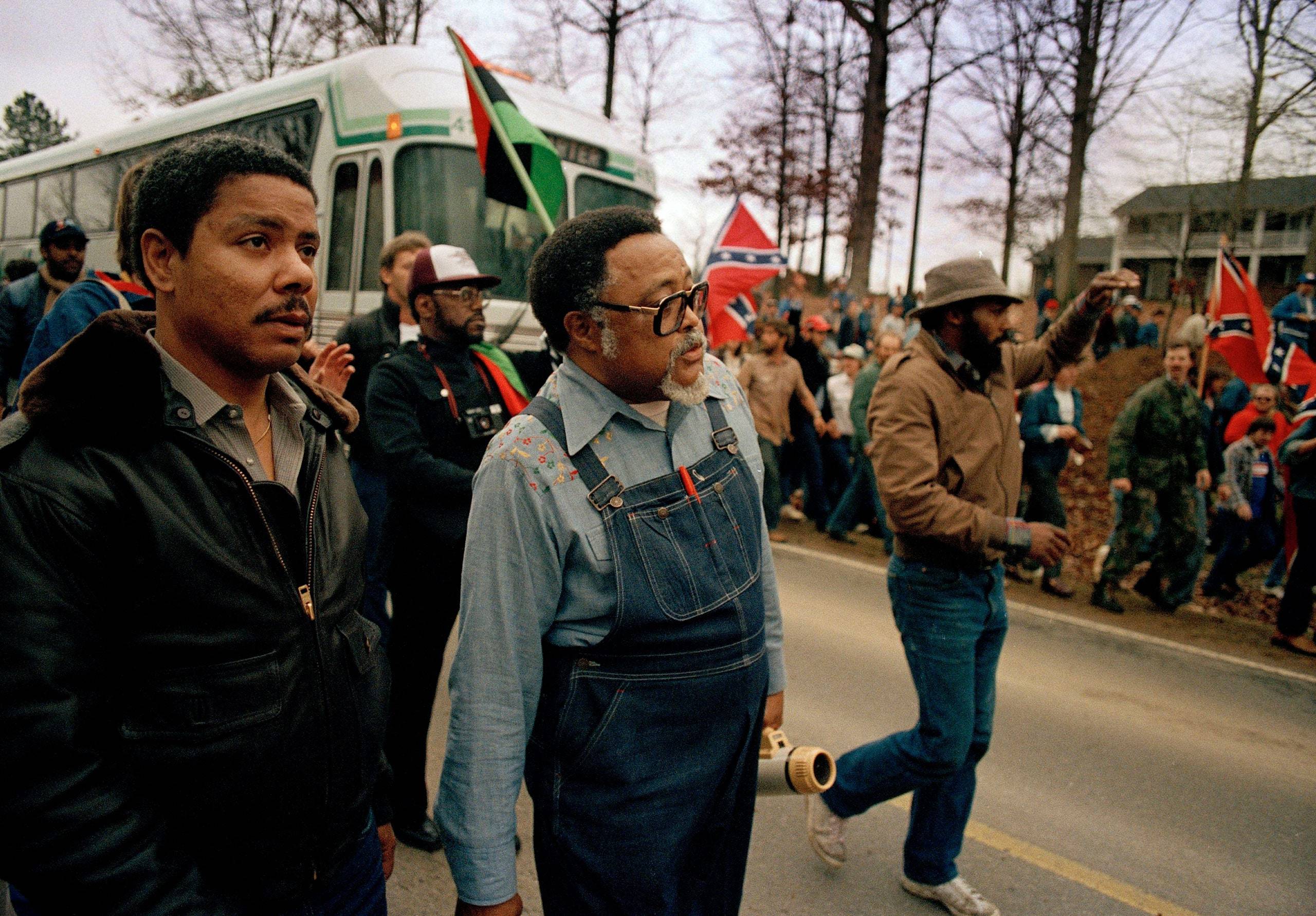 Nearly fifteen years ago, the poets Natasha Trethewey and Patrick Phillips were sharing a taxi in New York City when they began talking about their shared Southern origins. She was born and raised in Mississippi; he grew up in Georgia. Midway through their conversation, Trethewey said to Phillips, “I know about Forsyth County. I know about where you are from.”

Only those who know the history of Forsyth County, Georgia, can imagine how exposed Phillips must have felt in that moment. The Equal Justice Initiative has documented sixty-four hundred lynchings of Black men, women, and children between 1865 and 1950, and, although every one of those was a horrific act, only one is known to have inaugurated a decades-long reign of terror. That terror is what Trethewey was referencing when she said she knew about Forsyth County. “Why have you been silent on this?” Phillips remembers Trethewey asking him. “Do you think you’re not involved?”

Trethewey challenged her friend to write about his whiteness, as she had written about her Blackness, and it prompted him to spend years investigating the lynching of a man named Robert Edwards, in 1912, and all the violence that followed: church burnings, house bombings, and night raids that forced out the nearly eleven hundred African-Americans who lived in Forsyth County at the time. For seventy-five years, almost none returned. Phillips published his painful survey of that history, Blood at the Root: A Racial Cleansing in America, in 2016, and I have thought about it often in the weeks since the murder of George Floyd, especially while watching the wave of protests—in large cities and small towns and everywhere in between—that have followed. Phillips’s book provides a model for the kind of reckoning that other Americans should undertake, wherever they call home. 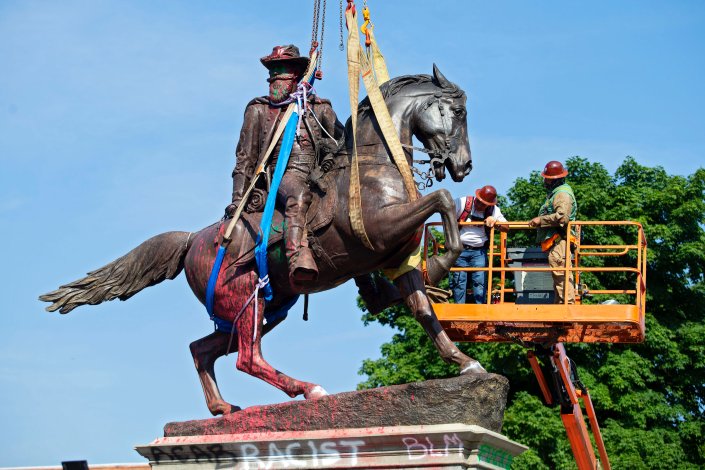 When we look back on 2020, the emblematic photos of the year will undoubtedly include images of crowds gathered around toppled, spray-painted statues. The indictment of these monuments has focused the country’s attention on how the history of slavery in the United States casts a long shadow that stretches all the way from the Middle Passage and Jim Crow to the protracted record of police violence against African Americans that led to the Black Lives Matter movement in the first place.

The histories of slavery and **racism in the United States have never been more pertinent. This is also the case for the comparatively understudied history of race as a concept, without which it is impossible to understand how Europeans and their colonial “descendants” in the United States engineered the most complete and enduring dehumanization of a people in history.

The logic behind the history of race initially seems deceivingly clear: to justify the forced deportation of 400,000 Black Africans to North America (and another eleven million to other parts of the Americas between 1525 and 1866), Europeans and their American heirs found it necessary to debase and revile their captives. Yet today’s racism is more than a malignant byproduct of the 19th-century American plantation system; it also grew out of an elaborate and supposedly “scientific” European conception of the human species that began during the Enlightenment.

Mary Armstrong was born into slavery on a farm near St. Louis, Missouri. At the end of her life, she told an interviewer that her owners were “the meanest two white folks who ever lived.”

The master, William Cleveland, Armstrong remembered, used to “chain slaves up to whip ’em, and rub salt and pepper on him, like he said, ‘to season him up.’” When he sold a slave, “he’d grease their mouth all up to make it look like they’d been fed good, and was strong and healthy.” (Interview transcribers attempted to capture Armstrong’s words as spoken.)

Cleveland traded Armstrong’s mother to another owner in Texas when Armstrong was young. Cleveland’s wife, Polly, whipped Armstrong’s 9-month-old sister to death. She tried to do the same to Armstrong, but Armstrong threw a rock at her eye and sent her off, howling in pain.

When she was about 17, Armstrong was set free by her new owners, Polly Cleveland’s daughter and son-in-law. It was 1863, two years into the Civil War. 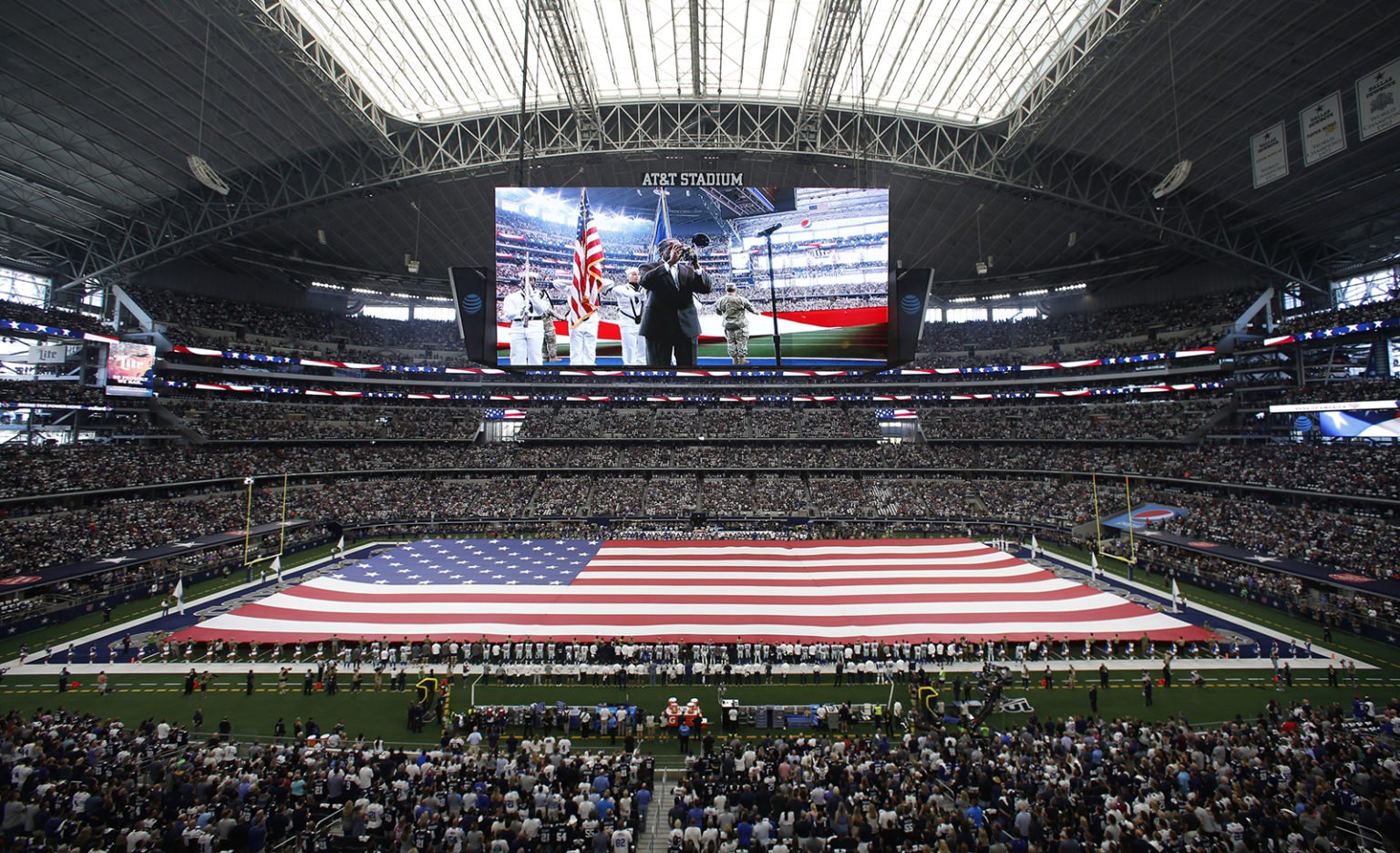 (RNS) — Last week NFL Commissioner Roger Goodell announced that the league would play the hymn “Lift Every Voice and Sing” before its first games on Sept. 10 as a recognition of racial injustice. To do so would be sacrilege.

For those unfamiliar with the song, “Lift Every Voice and Sing” — often called the “Black national anthem” — is one of the most widely shared sacred artifacts in the African American experience. Its lyrics were written in 1900 by activist, author and educator James Weldon Johnson, who enlisted his brother, composer and musician J. Rosamond Johnson, to set it to music. 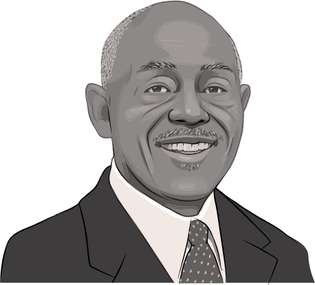 Many millions of people have viewed the video showing the sadistic killing of African American George Floyd. The sickening disregard of Mr. Floyd’s pleas, and the subsequent splurge of police officers demonstrating incompetence at performing the difficult task of crowd control in a professional manner, reveal the out-of-control strain of violence permeating our police departments to the entire world.

With the exception of a subpopulation of recalcitrant antiblack racists and some conservatives holding fast to unnuanced calls for law and order by any means necessary, Americans believe the killing is indicative of systemic racism in police departments, not merely some isolated incident. Following the Floyd killing, substantial increases in the percentage of Americans polled believed there is a systemic policing problem in the nation.