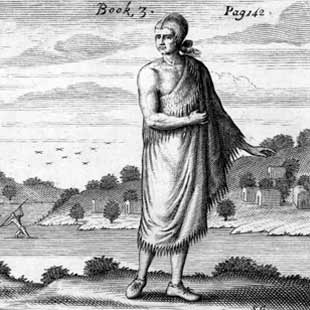 The basic story of John Smith and Pocahontas, whether in fiction or history textbooks, is well known; indeed, it became more a legend than history. The fact that Smith failed to write about Pocahontas saving his life before 1624 (when the event actually happened in 1607) led many to believe that the story was actually a fable. Scholars now attribute this omission to the fact that the Virginia Company did not want any "hair-raising" stories about Virginia Indians to become public and possibly dissuade potential colonists from migrating to the colony. What is Smith's story about his captivity? What are Smith's attitudes toward these Indians? To what extent does Wingfield's report support Smith's story?

View the original documents by clicking on the links below. Both documents are from The Capital and the Bay. Use your browser's Back Button to return to this point.

Governor Edward-Maria Wingfield's Report, 1607
Decem.--The 10th of December, Mr Smyth went vp the ryuer of the Chechohomynies to trade for corne. He was desirous to see the heade of that riuer; and, when it was not passible wth the shallop, he hired a cannow and an Indian to carry him up further. The river the higher grew worse and worse. Then hee went on shoare wth his guide, and left Robinson & Emmery, twoe of our Men, in the cannow; wch were presently slayne by the Indians, Pamaonke's men, and hee himself taken prysoner, and, by the means of his guide, his lief was saved; and Pamaonché, haueing him prisoner, carryed him to his neybors wyroances to see if any of them knew him for one of those wch had bene, some twoe or three yeeres before vs, in a river amongst them Northward, and taken awaie some Indians from them by force. At last he brought him to the great Powaton (of whome before wee had no knowledg), who sent him home to our towne the viijth [seventh] of January.

top of page View the original documents by clicking on the links above. Both documents are from The Capital and the Bay.
Big Isms
LT
Author, Mosaic Artist, Blogger, wildly curious