Contemptible Collectibles
Posted: 22 Apr 2019
Content Note: This post discusses racist memorabilia in sociological context and provides an image of one collection critical of this memorabilia below the page break.

Why do some people collect racist memorabilia and artifacts? Objects depicting African Americans in derogatory and stereotypical ways are commonly referred to as “black memorabilia” or “black Americana,” although scholar Patricia Turner more aptly names them “contemptible collectibles.”
As documented by David Pilgrim, founder and curator of the Jim Crow Museum of Racist Memorabilia, these artifacts include everyday objects like toys and games, household items such as cookie jars, and postcards. Although usually associated with the Jim Crow era, many of the items are still produced or reproduced today, and all draw on racial caricatures, such as the “mammy,” “Tom,” “picanniny,” and “brute,” among others. 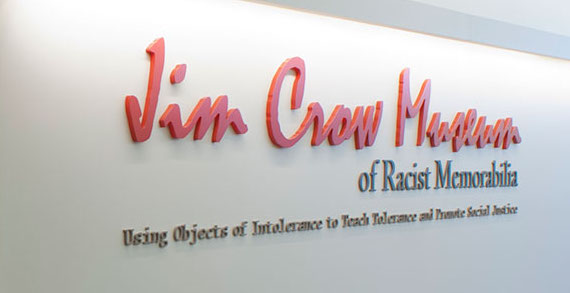 Not without controversy, “contemptible collectibles” have different meanings to different people. Some collectors embrace the racist meanings attached to the items. Others buy the objects with the intent of destroying them. Still others hope to “liberate” the artifacts from their previous racist history and hold the objects in “high esteem” instead.
Les Whittington, the grandson of an enslaved person and whose life history is the focus of my recent research, has another reason for collecting. Ignorance or denial of the history of African Americans—especially in Appalachia, where he is from—motivates him to document the existence of slavery and the ensuing Jim Crow era.
Part of Les’s collection includes multiple “mammy” figurines, which he displays in a case, where they look like a small army of racist caricatures. The objects are shocking to see, not just because such iconographic pieces of racist memorabilia are disturbing, but also because seeing so many together is a reminder of the objects’ pervasiveness in the past.
This history may seem long past, but not to Les for whom the legacy of slavery is immediate. His grandfather, “John Myra” Stepp, was enslaved, and died the same year that Les was born.
Les himself grew up in a mostly racially segregated world. Though Brown v. Board of Education ruled that segregated schools were unconstitutional in 1954, it wasn’t until 1966, when he was in the sixth grade, that Les’s school became the first middle school in his hometown to fully integrate. And another of his relatives, Barbara Hawkins, also one of John Myra’s grandchildren, was one of four Black students to attend the newly integrated high school in 1965.


His family members faced adversity with great resolve, and Les has told me, “And no matter what, they persevered. They were resilient. And they were smart. Because even though they had all those obstacles in front of them, they were still a success.”

But don’t mistake Les’s comments for a “pull yourself up by your bootstraps” narrative. Nor should his comments be taken as a way to obscure past or present racism and white supremacy, as Robin Di’Angelo argues is far too common. Instead, as Les has explained to me, his collection is “physical documentation of a lot of hate,” and represents “a history that doesn’t need to be forgotten, [. . .] even though it’s painful to people.”
Les also acknowledges that the objects are relevant to today, a message repeated by more well-known collectors, such Alan Page (a former NFL player) and his wife Diane Page. Echoing Les’s concerns about the objects, Diane has noted that “contemptible collectibles” are a “constant reminder that we have to be vigilant,” especially because “people have become more comfortable of late expressing racist views publicly.”

Jacqueline Clark, PhD is a professor of sociology at Ripon College. Her teaching and research interests include social inequalities, the sociology of health and illness, and the sociology of jobs and work.
(View original at https://thesocietypages.org/socimages)
Big Isms
LT
Author, Mosaic Artist, Blogger, wildly curious